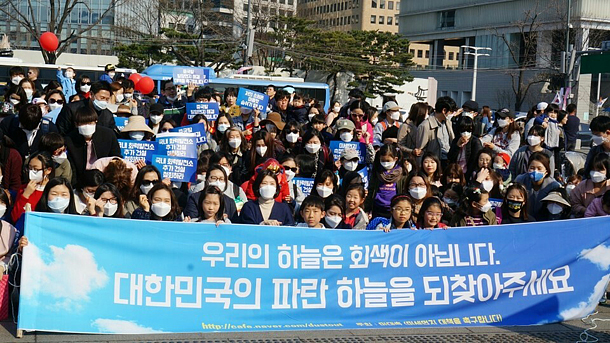 Members of an online community called Dust Out, reportedly largely composed of mothers in their 30s and 40s, rally at Gwanghwamun Square in central Seoul on April 2 to call for more government action to address air pollution. “Please return the blue sky to Korea,” reads the banner they are holding. [DUST OUT]

Mothers have taken up the cause to fight for cleaner air, as about 44,000 of them have joined an online community that quickly developed into a civic group calling for more government action with regard to worsening air pollution.

“Some 80 percent of us are women in our 30s to 40s,” said Lee Mi-ok, the 38-year-old mother of a 4-year-old in Ansan, Gyeonggi, and a member of the group’s steering committee. “Like many of the members, I wasn’t interested in environmental issues before I joined.”

Since the establishment of the online community named Dust Out last May, the group has held four meetings with the Ministry of Environment to submit policy suggestions on improving air quality. They drafted a 44-page report in February detailing their requests to the central government, which included requiring the use of air purifiers at child care centers and in schools and publishing specific analysis on fine dust and their sources.

Air pollution in Seoul was the second-worst among cities listed by AirVisual on the morning of March 21, after New Delhi. Just the day before, the city had issued for the third time this year a warning about the unhealthy level of fine dust particles in the air. The warning is issued when the concentration of PM2.5, or particulate matter less than 2.5 microns in diameter, exceeds 90 micrograms per cubic meter for more than two hours.

They chanted as they held up signs that read, “Fine dust policy needed now,” or “Deal with carcinogens flying in from China.”

While the Ministry of Environment has largely pinned part of the blame for air pollution here on China, there are experts who say otherwise.

“I don’t think the problem can be addressed by blaming China,” said Choi Ye-yong, director of the Asian Citizen’s Center for Environment and Health, a civic group based in Seoul. “Recent studies have pointed out that the contribution to air pollution by vehicle emissions have dropped somewhat, but I still think that is one area that needs to be worked on, not just by the Ministry of Environment but by all citizens of this country.”

It was not issued once this year.

“We will change this policy and, from now on, pull government cars off the road if the fine dust concentration exceeds 50 micrograms per cubic meter between midnight and 4 p.m. and it remains so the next day, too,” the Ministry of Environment and local governments of Seoul, Incheon and Gyeonggi said in a joint press release on Wednesday.

“A detailed analysis of fine dust concentration in the air will be produced by the National Institute of Environmental Research in the near future,” the release said. “It will determine the domestic, international and climate causes of air pollution.”

Lee said more politicians need to speak up on the matter, as well.

“We are not going to support a certain political party or anything like that, but we’d at least like to see more politicians come up with specific analysis and responses to the air pollution problem,” Lee said.