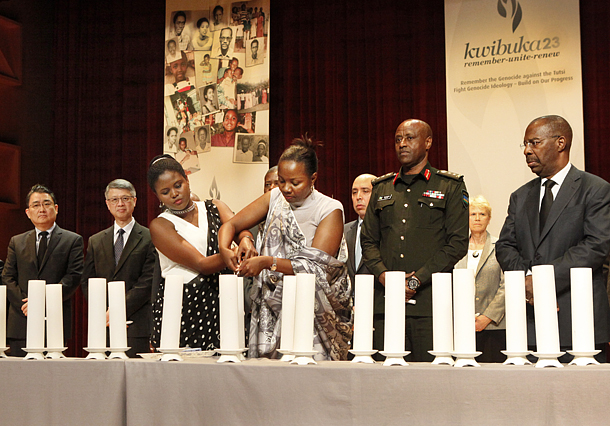 Ambassador of Rwanda to Korea Emma-Francoise Isumbingabo, fourth from left, lights one of the 23 candles at the Far East Broadcasting Company in western Seoul on Friday to commemorate the 23rd year since the genocide in which an estimated 800,000 Rwandans were killed. [PARK SANG-MOON]

About 500 people, gathered at the auditorium of the Far East Broadcasting Company in western Seoul on Friday, held up electric candles as Rwandan Ambassador Emma-Francoise Isumbingabo and diplomats lit 23 candles on stage in memory of their friends and family members who perished in the Rwandan genocide 23 years ago.

“Over one million people died within 100 days, and we gather to honor the victims who were brutally slaughtered,” said Eliab Ayinabyona, chairman of the Rwandan Diaspora in Korea.

Most of the victims killed were members of the Tutsi population. The genocide is largely considered to have been sparked by the sudden death of Rwandan President Juvenal Habyarimana, a Hutu, when his plane was shot down on April 6, 1994. No party has yet taken credit for the attack.

“Every year, from April 7 to 13 in Rwanda, in all diplomatic missions and in all Rwandan communities across the world, events are organized to commemorate the genocide,” Rwandan Ambassador Emma-Francoise Isumbingabo said. “This is a moment to pay tribute to those who perished and survived.”

Rwandans and non-Rwandans alike bowed their heads for a moment of silence, and prayed together with Ed Cannon, president and CEO of the Far East Broadcasting Company USA.

Many at the Kwibuka 23 commemoration were personally affected by what had happened.

“It’s a mixed feeling,” said Habimana Gilbert, a Rwandan resident in Korea for seven years. “At first you feel sad because it’s a memory you have, bad memories.”

Gilbert lost his grandmother and uncle in the genocide.

“It’s still hard because it brings back memories of friends, sisters and brothers who died in the 1994 genocide, but now we are looking ahead, to build a nation and to succeed,” said Joseph Ndahiro, a Rwandan studying at Seoul National University. Ndahiro also lost relatives during the genocide.

“We are commemorating the event all over the world to remember our brethren and friends who died,” said Ndahiro. “As a member of a Rwandan community, I decided to come.”

There are some 160 Rwandans living in Korea, according to the Rwandan Embassy in Seoul.

Rwandans and foreign guests at the ceremony celebrated the progress the country has made since the genocide 23 years ago.

“This is the time to remember that evil is still living with us. Terrorists will never give up to spread horrors around the world, today they are still roaming around trying to finish their apocalyptic planning for more attacks on Rwanda,” said Maj. Gen. Bosco Kazura, commandant of the Rwanda Defense Force Command and Staff College. “Fortunately, they have never succeeded and they will never succeed. Rwandans are ready because they know genocide’s devastating effects. They are resolutely moving together with dignity, courage and love, leading to social economic development of the country.”

“I strongly believe that 23 years of success of national reconciliation is the greatest achievement of the people of Rwanda,” said Park Yong-min, director-general of the African and Middle Eastern Affairs Bureau of the Ministry of Foreign Affairs. “Unity based on agaciro [dignity in Kinyarwandan] is what Koreans need to learn.”

“At the time, I was five years old, but I can remember some things,” Gilbert said. “But all over the world, people die all the time. Wherever in the world there are many wars, many killings and many innocent people are dying right now today.

“What matters is what I am doing today to help those people,” he added. “A lot of things have passed and I have seen a lot, but now the country is great and we have great governance, so I’m happy we’re building our country in this way. That’s all that I can say.”