Eagles’ Bae back and as good as ever before

Eagles’ Bae back and as good as ever before 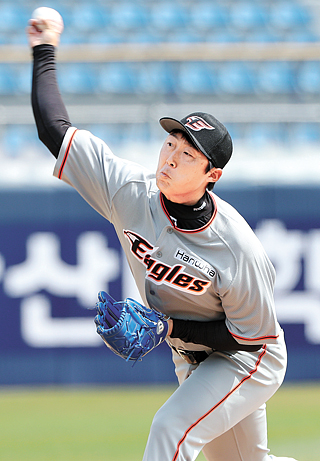 Bae Young-soo of the Hanwha Eagles started his career stronger than most, but has now returned to the mound just as good as he was in his rookie year, pitching six scoreless innings to lead the Eagles in a 6-0 win against the NC Dinos on April 4.

Becoming a winning pitcher for the Eagles wasn’t just a matter of luck for Bae. His record throughout the game, throwing six scoreless innings while allowing three hits and netting five strikeouts, proves it. Although his average pitching speed was 141 kilometers (88 miles) per hour, his sliders and curveballs targeted the corners of the strike zone.

During Bae’s prime time as pitcher, he received multiple KBO awards, winning the KBO MVP and Golden Glove Award in 2004. Not only that, he played for the Lions when they won the Korean Series six times. 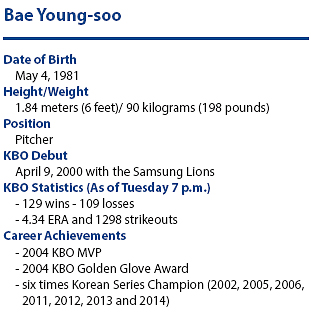 But once he entered his 30s, the speed of his pitches decreased and he was no longer a reliable pitcher for the team.

Even worse, in 2016, Bae didn’t make an appearance in any Eagles games due to elbow surgery and rehabilitation. Although he was back with the Eagles in August, he was not able to pitch for the remainder of the season. As a result, his name was slowly forgotten by fans. But Bae never gave up. After elbow surgery, Bae focused heavily on physical conditioning.

In October, Kim Sung-keun, the team’s manager, sent Bae to Miyazaki pre-game training camp, where Future League players and rookies train. It certainly was quite an embarrassment for a player of Bae’s experience to have to join the training camp.

“I was the oldest player in the league,” Bae said. “Honestly, I was kind of upset at the manager for sending me there. And I was embarrassed.”

Throughout his time at the training league, Bae learned to get rid of his fear of being on the mound. Upon completion of the training camp, Bae practiced by himself in January and tried harder than anyone to get his name into the Eagles’ starting rotation. With that, he returned as a new pitcher.