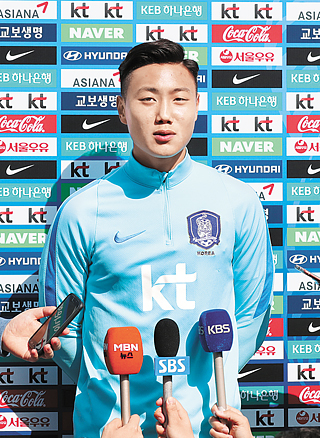 Paik Seung-ho, midfielder for the U-20 Korean national football team, seemed as if he lost a lot of weight through intense national team training for the upcoming World Cup, but he expressed a determined resolution during the interview at the Paju National Football Training Centre on Monday.

“We have less than 40 days until the World Cup,” Paik said. “We’ll improve on our weakness. This is a good opportunity for me as well. I’ll think of this as a turning point in my football career.”

Shin Tae-yong, manager of the U-20 national football team, called up 25 players for April training and he will have to cut at least four players to finalize his squad for the U-20 World Cup.

Upon completion of the test events, which the team won, Paik started a personal training course with Luis Flavio, physical training coach for the U-20 national football team. Paik trained accordingly to Shin’s program without taking a day off. 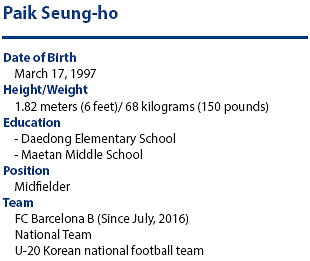 In March, the U-20 Korean national football team played the FIFA U-20 World Cup test events with Honduras, Zambia and Ecuador. During the test events, Paik recorded two goals to help the team win.

“Looking at my performance over test events, I lacked in decision-making skills and physical strength,” Paik said.

Paik, who plays for FC Barcelona B, had been on the U-20 Korean national football team since 2014 but surprisingly, this is the first time Paik will be competing in a FIFA tournament.

“I do feel pressure as the World Cup is hosted at home but mentally, we are ahead of them,” Paik said with confidence.

To fully prepare themselves for the World Cup, the U-20 team will play friendly matches every week. The team will start its friendly match against Myongji University on Friday at the National Football Center in Paju, Gyeonggi, against Suwon FC, a club in the second-tier K-League Challenge, in Suwon, Gyeonggi, on April 10. And for its last match, they will play against Jeonbuk Hyundai Motors in Jeonju, North Jeolla, on April 26.

Jeonbuk won the Asian Football Confederation (AFC) Champions League last year, but were expelled from this year’s competition following a bribery scandal involving one of their scouts. Jeonbuk is currently second in the top-flight K League Classic this season.

Since the U-20 is scheduled to play its first two matches at the Jeonju World Cup Stadium, playing their last friendly match against Jeonbuk will help the team’s preparation for the World Cup group match.

Once they are completed with the friendly matches, the U-20 team will start its World Cup match against Guinea in Jeonju, on May 20. The U-20 team, assigned in Group A, is paired with Argentina, England and Guinea at the 24-team FIFA tournament. The top two teams from six groups will automatically advance to the round of 16. In addition to the eight teams, the four teams that finish third from each group will also advance to the round of 16.

Korea will host the FIFA U-20 World Cup from May 20 to June 11 in six different cities - Cheonan, Daejeon, Incheon, Seogwipo, Jeonju and Suwon.