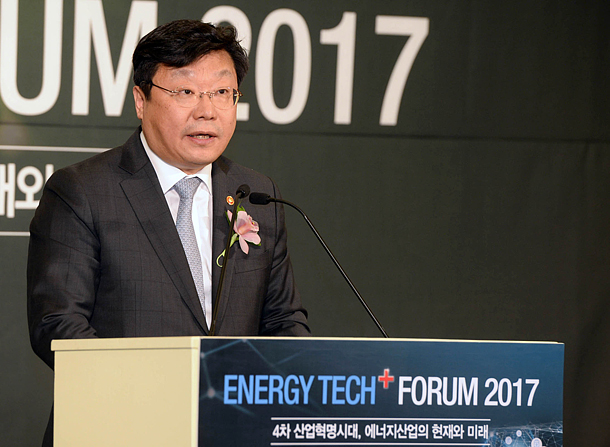 The Korean government will spend 760 billion won ($660 million) this year on research and development in growing energy sectors including renewable energy and smart grids, the Ministry of Trade, Industry and Energy said Tuesday.

The budget represents a 36 percent increase from last year.

“The government will give every possible support to have the country develop new technologies in energy so that Korea can become a global key player in the energy sector in the future,” said Trade Minister Joo Hyung-hwan during a seminar at the Sheraton Seoul Palace Gangnam Hotel in southern Seoul that was attended by about 350 experts from the private and public sectors.

“It won’t be easy to achieve such goals in a short period of time, so the government will focus on supporting the industry from a long-term perspective. Energy is the key solution in the fourth industrial revolution as it can contribute to solving major problems we face such as the environment and productivity of industries in general.”

The government’s plans include expanding investment in research on renewable energy. The ministry said it would double spending on such projects to 1.12 trillion won by 2021 from the 560 billion won spent last year.

Among the government’s investment, about 30 percent went to development of new energy technology. The government wants to expand that to 40 percent by next year. The plan is to create more cost-effective solar energy systems and batteries.

“The government will spend another 100 billion won this year for energy projects on smart grids, energy storage systems and micro grids,” said Huh Jung-soo, a director at the Trade Ministry.

The 100 billion won represents a 32 percent increase from the budget allocated last year for such projects. The Korean government has named smart grids and micro grids as flagship “growth engines” and plans to implement them nationwide with the goal of ultimately exporting the technologies overseas.

Smart grids use advanced information technology to efficiently deliver energy and maximize power by analyzing its distribution. Micro grids are used in remote areas like islands, where such a system can help distribute power generated by renewable energy sources.

Experts who attended the seminar argued that there need to be fundamental changes made in the country in order for Korea to leap forward in the energy sector.

“Korea is still very dependent on coal and nuclear power plants, and some research shows that about 40,000 people die early from pollution caused by coal power plants,” said Lee Min-hwa, chairman of the Korea Creative Economy Research Network. “The government has been saying it will push forward various plans to develop new kinds of renewable energy, but I believe the progress is still far below expectations. Korea’s power service providers need to share more information with others.”

According to Lee’s analysis, it is highly unlikely that Korea will gain as much as 11 percent global market share in the renewable energy sector by 2035 under the current system as it hopes. Korea’s global share as of 2016 stood at a mere 1.06 percent.