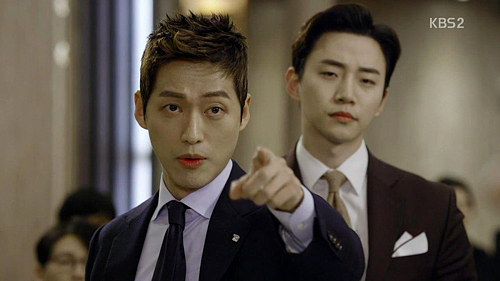 “Good Manager” scored 260.7 points on the Content Power Index (CPI), becoming the most popular TV program from March 27 to April 2.

CPI, developed by entertainment company CJ E&M and Nielsen Korea, measures the popularity of TV shows based on the number of views of related news stories, online search tallies and buzz on social media.

“Good Manager” stars Namkoong Min, pictured left, as Kim Sung-ryong, an accountant at the fictional TQ Group and a genius at embezzling corporate funds. An anti-hero, Kim ends up fighting for the rights of employees and against greater corruption within the workplace. The series ended its 20-episode run on March 30 to critical and commercial acclaim.

“Whisper” entered the chart at No. 2, scoring 248.4 points. Lee Bo-young plays Shin Young-joo, a homicide detective who seeks revenge on Lee Dong-joon, a conflicted judge played by Lee Sang-yoon, who wrongfully convicts her father of murder. During her quest, Shin ends up falling in love with her nemesis.