Korean comedy is telling the same old jokes, and few are laughing : Despite a political mess ripe for satire, TV shows are missing the mark

Korean comedy is telling the same old jokes, and few are laughing : Despite a political mess ripe for satire, TV shows are missing the mark 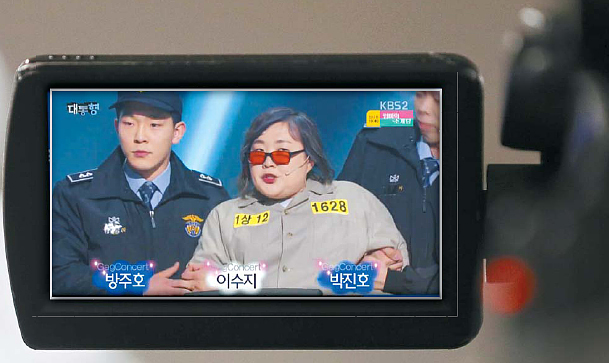 When going through a tumultuous political event, many turn to comedy for consolation. A touch of humor gives a sense of relief or a break from all the chaos, because after all, comedy thrives in adversity.

Then, why during arguably one of the largest political scandals in Korea’s history, are TV comedy programs struggling to attract viewers? KBS2’s 18-year-old comedy stalwart “Gag Concert” only managed to receive a viewer rating of 8 percent this past week. Only three years ago, it was averaging 16 percent on a weekly basis.

In 2012, a year that saw both a legislative and a presidential election, “Gag Concert” reached viewer ratings of over 20 percent, led by the cheeky satirical jabs from comedian Choi Hyo-jong in his “Praying Mantis Kindergarten” sketch. Cable network tvN’s Saturday Night Live Korea, the local version of the long-running American comedy show, also saw a spike in viewers, with its “Yeouido Teletubbies” sketch, where each of the presidential candidates was represented by one of the characters from the popular British children’s show.

Many pundits point to television’s diminished ratings across the board thanks to the rise of digital media, and the wide array of other options to choose from. But is that really the reason why comedy programs are facing such sluggish ratings? A similar shift has been seen in the media environment of the United States, yet Saturday Night Live is having its most-viewed season in 22 years with sketches satirizing new U.S. President Donald Trump and his policies, while late night talk shows, known for their political humor, have also recorded a ratings spike.

For all the problems that Korean comedy programs face due to changing viewing habits, experts cite a system weak on innovation, shallow satire and anachronistic jokes as preventing local comedy from resonating with the public. 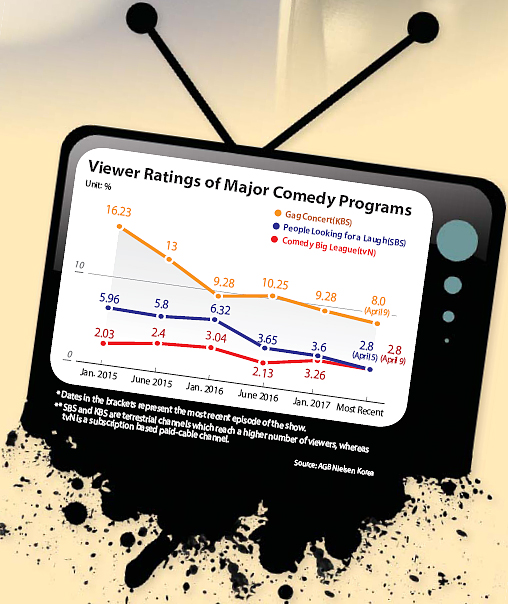 The age-old adage of “if it ain’t broke, don’t fix it” still rings true to this day, but for Gag Concert, a show with an 18-year history, the fact that there hasn’t been any major changes to the show or the production process has led to the program’s current lack of spark.

“While television programs are searching for new ways to adjust to digital platforms, comedy programs are obstinately maintaining the rigid structure of having a broadcaster and a stage,” Son Ki-eun, feature editor for men’s magazine GQ Korea, wrote in its Jan. 2016 edition. “Gag Concert especially, still maintains and prides itself on its military-esque culture of senior comedians overpowering new recruits by year of admission.”

In 2012, when Seo Soo-min, the chief producer of Gag Concert at the time, was drawing viewers after a successful change in power in 2010, she credited the success to its “very strict pecking order between comedians,” in a speech given titled “Hope Concert,” hosted by online service provider company YES24. Although Seo led Gag Concert to recapture its glory days, it was during her tenure that the sharp decline started as well.

GQ Korea’s Son believes this very tradition is an obstacle for comedy programs. “Refining jokes through numerous meetings, seniors teaching newcomers, setting up a format and only changing subject matter weekly is too steadfast, and can’t eliminate the feeling of only having small variations weekly to existing formats.”

“The nature of open-stage comedy is to make the audience laugh in a short amount of time,” culture critic Hwang Jin-mi told the Korea JoongAng Daily. “They need to make the audience crack up immediately, and with all the competition like “People Looking for a Laugh” and “Comedy Big League” being introduced, the need to get the audience laughing is greater. That is why comedians oversimplify jokes and use radical characters.”

Hwang also said that the programs are not keeping up with the times. “It’s an uphill battle when all of the funny jokes are on social media platforms. No one’s going to sit through a 60 minute-plus show when they can find [funnier] memes in an instant on their smartphones.” 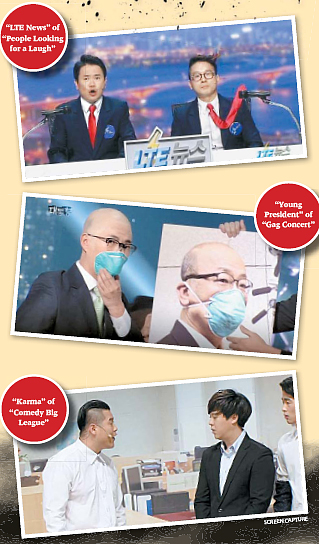 Television critic Lee Ga-on said that comedy programs deal with politics through “just a simple repetition of the exact words that politicians reportedly said. To viewers, this just seems complacent.”

She continued, “Along with the now famous quote ‘she [ex-President Park Geun-hye] was late because she was getting her hair done,’ reality is much more absurd than comedy. Comedians might think using the exact quote is enough to make the audience laugh. However, viewers already have higher standards and are much more keen and sharper than that.”

In recent months, TV comedy programs parodied Park’s friend Choi Soon-sil, who allegedly intervened in state affairs. However, a famous sci-fi writer and culture critic who writes under the pen name Djuna, wrote that those parodies fail to be “real satire,” in a column titled “Stop with the Choi Soon-sil Costume Play, We Want Real Satire,” which was published on the entertainment news web site EnterMedia on Nov. 8.

Djuna pointed out that Korean comedians, not guaranteed the protection of their freedom of expression and lacking the huge capital that supports American comedians, have been just making fun of easy targets such as “women, fat people and foreigners.”

Even when making fun of Choi, the jokes used were not too far off from the norm, Djuna wrote. “Whatever power Choi had in the past, she is now just an ajumma (a word that refers to middle-age women)… Korean comedians are used to mocking this kind of ajumma. Is there any insight or satire in these parodies?”

For a long time, stereotypes were commonly enacted in comedy. Stereotypes based on jobs, ethnicity, disability and gender were perverse, but deemed to be “just for fun.” However, that was more than a few decades ago.

Feminism was arguably the biggest social issue in 2015, with many women attempting to eliminate the deeply-rooted misogyny of Korean culture with online movements and offline gatherings.

Culture columnist Ha Jae-keun told the Korea JoongAng Daily, “Koreans have never been shy to make fun of people that were a little different from them. Thanks to the various calls for understanding diversity, we have seen some changes but still the pre-modern way of thinking remains deeply-rooted. We still have a long way to go.”

A recently finished Gag Concert sketch, “Can’t Take it Back,” carried the tone of traditional misogyny. As the girlfriend inflicts physical violence on the boyfriend, the show focuses on the very old idea that females are fuelled by emotions, and men suffer from that.

“The result in seeking a breakthrough of escaping traditional female roles was [for women] to present themselves as a neutral gender,” said Hwang, “Although initial signs showed promise, like Jang Do-yeon playing a transgender woman in ‘Female Friend,’ there hasn’t been additional attempts since.”

Jang was sued, along with the executives at tvN behind the show for contempt by a civic group that advocates for the rights of single-parent families. Jang stepped down, and the show was given a warning from the Korea Communications Standards Commission.

TV critic Lee said, “I believe these results stem from the comedian’s lack of input. The constant obsession of having to make the audience laugh while reflecting current societal issues pressures comedians to make these kinds of mistakes.”

However, not a lot has changed since then, as tvN’s SNL Korea also found itself in trouble against the Korea Communications Standards Commission later the same year, after it used breast cancer patients as a source of comedy.

Columnist Ha stressed the importance of the soon-to-be-elected government’s role. “For comedy to reach its former status, the newly-elected government needs to create an atmosphere that shows tolerance of satire.”

Culture critic Hwang was more pessimistic on the chances of stage comedy programs making a comeback.

“I believe the open-stage comedy format did all it could during its 20-year span on Korean television. All of the programs [are basically doing the same thing week to week] - even ‘Comedy Big League,’ which seemed innovative at first, is now going the easy route.”