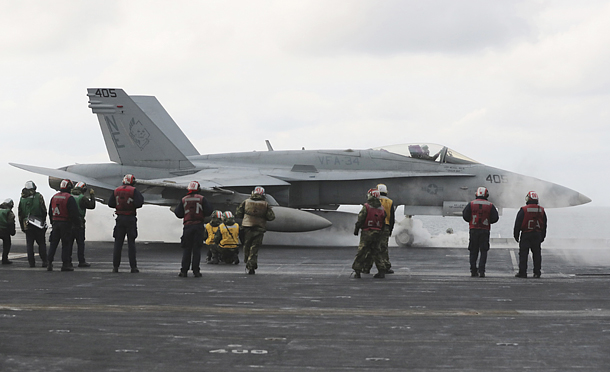 In this March 14, 2017 file photo, an F/A-18 fighter prepares to take off from the deck of the Nimitz-class aircraft carrier USS Carl Vinson during the annual joint military exercise called Foal Eagle between South Korea and the United States at an unidentified location in the international waters, east of the Korean Peninsula. North Korea is vowing tough counteraction to any military moves that might follow the U.S. Navy's decision to send the USS Carl Vinson aircraft carrier and its battle group to waters off the Korean Peninsula. [AP/YONHAP]

North Korea warned Tuesday it will take the "toughest" military action against Washington following the U.S. Navy’s deployment of an aircraft carrier strike group to the Korean Peninsula.

A spokesman of the North Korean Foreign Ministry said through the state-run Korean Central News Agency (KCNA) that it will hold the United States “wholly accountable for the catastrophic consequences entailed by its outrageous actions,” adding that Pyongyang is “ready to react to any mode of war.”

The spokesman went on to warn that such actions by Washington justify increasing “its military capabilities for self-defense” or a “pre-emptive attack with a nuclear force.” He added the North will take the “toughest counteraction” against anyone who provokes it and defend itself by a “powerful force of arms.”

Pyongyang's saber-rattling reflected heightened tensions amid the possibility of a sixth nuclear test or a ballistic missile launch by the North this month to coincide with major military and political events. U.S. President Donald Trump recently ordered his National Security Advisor H.R. McMaster to prepare for “a full range of options,” leading to renewed concerns of a possible pre-emptive strike or military action by Washington.

Trump’s decision to fire Tomahawk cruise missiles at a Syrian air base last week during a summit with Chinese President Xi Jinping underscored his administration’s willingness to use military action to send a political message.

Pyongyang’s official Rodong Sinmun warned Washington against a pre-emptive strike in a commentary, emphasizing the regime is “ready to counter any type of an aggression war.”

The North’s bellicose remarks came after the U.S. Pacific Command on Saturday diverted the Carl Vinson Carrier Strike Group from a planned visit to Australia to move closer to the Korean Peninsula.

The aircraft carrier group, deployed from San Diego in January, was in the region less than a month ago for joint drills with the South Korean Navy, and its redeployment so soon was seen as a show of force by Washington in the region.

Australia and its allies have been put on standby for the possibility of Washington shooting down any test rockets launched by North Korea, according to Australia’s Daily Telegraph on Monday.

It reported that the United States is understood to have notified Australia that it is fully prepared to shoot down rockets, saying North Korea may launch ballistic missile tests around the regime’s founder Kim Il Sung’s birthday, according to intelligence sources. It added that the Australian-United States joint facility at Pine Gap, which monitors North Korean missile launches, is on standby.

The South Korean Ministry of National Defense tried to prevent public alarm over the possibility of an armed conflict on the Korean Peninsula in April. Many rumors have been spreading over social media.

However, the ministry’s spokesman Moon Sang-gyun said in a briefing Tuesday that any military actions will be “conducted under the robust South Korea-U.S. combined defense posture based on their close cooperation.”

The Defense Ministry also said that David F. Helvey, U.S. assistant secretary of defense for Asian and Pacific security affairs, and Wee Seung-ho, the deputy defense minister for policy, spoke over the phone and reaffirmed unity amid tensions on the Peninsula.

Helvey briefed Wee on the results of the summit between President Trump and President Xi in Florida last week and how to jointly respond to Pyongyang’s recent ballistic missile launches, said the ministry. It added that Helvey condemned North Korea’s missile launch earlier this month “in the strongest language possible and agreed to continue to strengthen the alliances’ response to North Korea’s nuclear and missile threat.”

South Korea’s Ministry of Foreign Affairs likewise emphasized that the United States will not act unilaterally without consulting Seoul on matters involving Pyongyang.

“South Korea and the United States through their diplomatic and defense authorities are closely coordinating on specific issues regarding North Korea’s nuclear and missile program,” said Cho June-hyuck, spokesman of the South Korean Ministry of Foreign Affairs, said in a briefing Tuesday. “The deployment of U.S. strategic assets near the Korean Peninsula is to maintain and bolster our combined defense posture to respond to the North’s threats and provocations and happening through the close coordination between Seoul and Washington.”

He added, "The United States has made it clear that there will be no new policy or action without prior consultation with us, the party directly involved in the issue.”