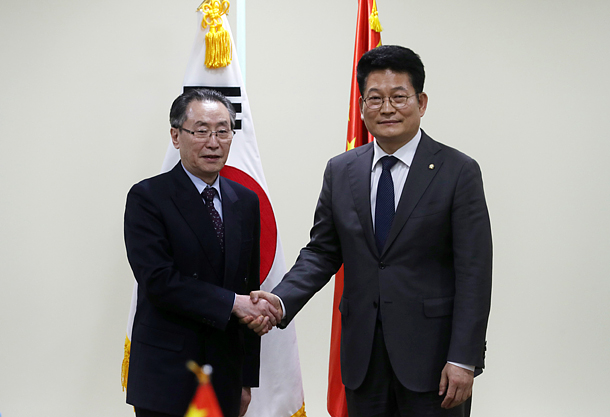 Wu Dawei, China’s top nuclear envoy, sought out major South Korean presidential contenders and their campaigns Tuesday as he conveyed Beijing’s concern over the deployment of the U.S.-led antimissile system, who in turn urged China to halt its economic retaliation against Korea.

China’s special representative for Korean Peninsula Affairs explained that Beijing is especially concerned over the Terminal High Altitude Area Defense, or Thaad, and its powerful X-band radar, as he moved to meet with key political leaders Tuesday.

Bareun Party’s presidential candidate, Yoo Seong-min, during his meeting with Wu at the Grand Hyatt Seoul Tuesday morning, emphasized the need for the deployment of Thaad to Korea as it is “a defensive weapon.”

Yoo said that he hopes the Thaad deployment issue can be “separated from economic cooperation in order to restore Korea-China relations to normal.” However, Wu was reported as not having shown much response to this remark. Beijing’s chief negotiator to the six-party talks said that “China is especially concerned about the X-band radar,” which he said has a detection range that covers nearly half of its northern province.

Wu added that China puts a “high degree of importance on the South Korea-China relationship,” adding that he would like to see bilateral relations “head in the right direction toward progress.”

Yoo told reporters after their meeting, “We discussed nearly all we could in regard to the Thaad issue, North Korea’s nuclear and missile problem, China’s economic retaliation and the South Korea-U.S. alliance and Korea-China relations.”

The progressive Justice Party’s presidential contender, Sim, likewise said that her party believes that the Thaad issue should be reviewed in the National Assembly, but emphasized, “it is urgent that China halts it economic retaliation against Korea.”

In their meeting with Wu, Moon’s campaign officials urged China to play an even more influential role over North Korea to prevent additional nuclear tests and provocations while urging a halt to Beijing’s economic retaliations.

Rep. Song expressed “regret” over the issues surrounding South Korea-China relations as they mark the 25th anniversary of bilateral ties. “The Chinese government may say officially that it is not undertaking [economic] sanctions over the Thaad problem, but in actuality, restrictions are ensuing,” he said. “We urge the withdrawal of such sanctions ahead of the launch of a new administration following the impeachment of President Park Geun-hye.”

Wu was said to have reiterated China’s opposition to Pyongyang’s possession of nuclear weapons and its firm opposition to any war on the Korean Peninsula, in response to recent reports of a possible pre-emptive attack by Washington on the North. The Chinese envoy said he “looks forward” to the Korean presidential elections in May and added that the deployment of Thaad is not in Korea’s “interest.”

People’s Party’s head Park said to Wu that his party, which currently says the agreement has to follow through, had to change its position on Thaad because of the shift in Korean people’s sentiment, which recognizes the importance of the traditional Korea-U.S. alliance, following the strong backlash from Beijing. He conveyed that the People’s Party’s initial position that the Thaad issue had to be ultimately decided in the National Assembly in opposition to the deployment of the battery during the negotiation process.

Wu kicked off a five-day visit to Seoul Monday by meeting with Korean Minister of Foreign Affairs Yun Byung-se and Kim Hong-kyun, the special representative for Korean Peninsula peace and security affairs. Wu’s talks and dinner with Kim spanned some four hours.

Kim told reporters on Monday that the two agreed that “strong additional measures, in accordance with UN Security Council resolutions, will be implemented if North Korea launches an intercontinental ballistic missile (ICBM).”

He added, “In the case of additional provocation by North Korea, strong Security Council resolutions as well as sanctions and pressure will follow,” adding that they shared cooperation as part of the five-party nations - China, Japan, Russia, the United States and South Korea - and that this cooperation is important in order to denuclearize North Korea.