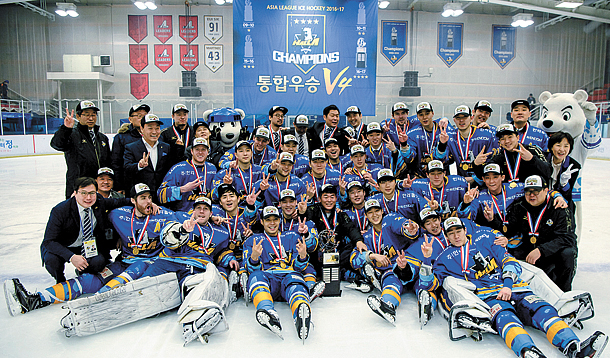 Anyang Halla pose for a picture with a playoff championship trophy after defeating PSK Sakhalin at Anyang Ice Arena on Tuesday. [YONHAP]

Due to limitation in distances, the first three matches were played at Halla’s home arena and the next two games were scheduled to be played at Sakhalin’s home arena.

Last season, Halla was at one win and two losses but won two consecutive matches at Sakhalin’s home arena to win the championship. Although this was Halla’s fourth playoff championship victory, this was the first time Halla got to celebrate their win at the home arena.

The players tried their hardest to win the playoff championship at home for the first time to avoid traveling to Russia.

But at the same time, Sakhalin was as determined as Halla for a win.

Halla took the lead in the beginning with Eric Regan’s goal but shortly after, they allowed a goal to Timofey Shishkanov to tie the game. When Shin Sang-hoon scored a goal in the second period to take a one-shot lead, once again, Sakhalin scored another goal to tie the game.

As both teams were not able to score additional goals in the third and fourth period, the game went into overtime.

But with Kim Ki-sung’s goal on a power play in overtime, Halla was declared 2016-17 ALIH playoff Champion.

Halla had impressive play over the season, recording 120 points, which is the most points earned in one season at the Asia League. Prior to the playoff series, Halla also won the regular season for third consecutive years.

Despite the absence of Halla’s main scorers, Brock Radunske and Mike Testwuide, who won the ALIH MVP award in 2015-16 season, due to injuries, the team was able to score as many goals as when they had two scorers.

The team’s achievements are also considered as the Korean men’s ice hockey team’s successes as the majority of the players in Halla are also members of the national team. The naturalized athletes playing for Halla and the Korean national team have definitely helped the domestic players to improve on their skills over the years.

The most recent national team achievement, the team won a silver medal at the 2017 Sapporo Asian Winter Games in February, the best result at the Asian Games in the national team’s history.

Also, during its friendly matches against Russia, second ranked team in the world, in March, they lost both of the matches but they played the games at a competitive level, leading against Russia at one point. With that, fans now look toward seeing the national team at the upcoming PyeongChang Olympics.