FC Seoul edges out Sydney for a 3-2 victory

FC Seoul edges out Sydney for a 3-2 victory 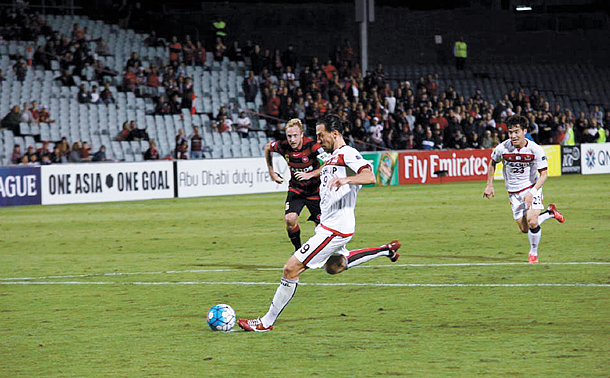 FC Seoul hung on to defeat the Western Sydney Wanderers 3-2 on Tuesday to stay alive in the Asian Football Confederation (AFC) Champions League.

A loss on Tuesday would have knocked FC Seoul, the reigning K League champs, out of the group stage for the first time.

FC Seoul, which made three Champions League semifinals in the last four years, have also moved out of the group cellar. They’re tied with Western Sydney at three points but have a better goal difference with minus-4 to the Australian club’s minus-8.

In the other Group F match on Tuesday, Urawa Red Diamonds defeated Shanghai SIPG 1-0 to move to the top of the standings with nine points. The two clubs also have the same number of points but Urawa are ahead in goal difference.

This was FC Seoul’s first win over Western Sydney in six Champions League meetings, after two losses and three draws.

FC Seoul’s next Group F match will be against Shanghai SIPG on April 26 in Shanghai. The Korean club lost the previous meeting 1-0 in February at home.

Lee Seok-hyun put FC Seoul on the board in just the fourth minute. Hwang Ki-wook secured the loose ball after Western Sydney failed to clear a free kick, and teed it up for Lee outside the box for a right-footed shot.

Though Western Sydney dominated the possession, FC Seoul managed to double their lead in the 42nd minute, when Dejan Damjanovic converted a penalty.

Western Sydney defender Scott Neville shoved Maurinho down to the ground inside the area for the foul. Damjanovic then stepped up and fired one into the bottom right hand corner, just out of reach of goalkeeper Vedran Janjetovic.

Damjanovic then picked up his second of the night in the 71st, firing a shot through traffic from the top left corner of the box.

The home side got a goal back in the 77th, as Terry Antonis took a feed from Jumpei Kusukami from right wing and rolled it past goalkeeper Yoo Hyun. Lachlan Scott then headed in a Nicolas Martinez cross during added time to get Western Sydney to within 3-2, but the hosts ran out of gas and time.

Another K League Classic club in action on Tuesday, Jeju United, lost to Adelaide United 2-1 in a Group H match at Jeju World Cup Stadium. With four points from a win, a draw and two losses, Jeju have slipped a spot to third place in the group,

Adelaide’s Korean player, Kim Jae-sung, gave his club a lead seven minutes after the kickoff, with a right-footed shot from outside the box. Jeju promptly tied the score in the next minute, as Magno Cruz headed in a Lee Chang-min pass from the right side of the area.

Adelaide broke the tie four minutes into the second half on a header by Dylan McGown, with Ben Garuccio setting him up with a cross. Riley McGree gave the Australian side a 3-1 cushion in the 65th, firing one home with his left foot from a close range.

This was Jeju United’s first loss to an Australian opponent at the AFC Champions League, after a win and two draws.