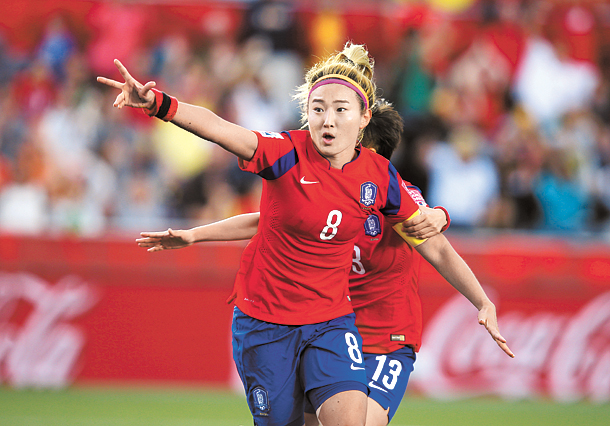 Cho So-hyun, captain of the women’s national team, celebrates after scoring a goal against Uzbekistan. [AFC]

Considering the barriers the South Korean women’s national football team faced in Pyongyang, their journey to North Korea was quite a success, finishing first in Group B to advance to the 2018 Asian Football Confederation (AFC) Women’s Asian Cup.

South Korea concluded its AFC qualifiers with a 4-0 win against Uzbekistan at Kim Il Sung Stadium in Pyongyang on Tuesday. South Korea was tied with the North with three wins, one draw and no losses, but since the South led in goal difference by 20, they were declared champions.

“Firstly, the players deserve full credit,” Yoon Duk-yeo, the team’s manager, said during an interview with AFC after the match against Uzbekistan. “We are delighted to have qualified, but of course the work starts here, as we hope to qualify for the World Cup in France.”

Of all its matches, South Korea probably had the hardest battle against North Korea, having to play in an unfamiliar atmosphere and in front of 50,000 fans cheering for North Korea. But the players’ spirit shined throughout the game, and the team scored a goal in the second half to finish with a 1-1 draw. Aside from this match, the team allowed no other goals from other teams.

Unlike the tough game against North Korea, it was quite an easy game against Uzbekistan as South Korea concluded the first half with a three-point lead. Ji So-yun led the team, scoring two goals, followed by Cho So-hyun, the captain, and Yoo Young-a, scoring one goal each.

Although Cho did not score the most goals in the game, she was the star of the game, balancing the team’s offensive and defensive skills on the field.

With her participation, Cho has registered her name with the Century Club, for players who have appeared in at least 100 full international matches. Cho is the third person on the women’s football team to do so, after midfielder Kwon Ha-neul and goalkeeper Kim Jung-mi. She is the 12th domestic football player to do so, including the men’s national football team players.

To get to her 100th international match, Cho competed at three Asian Cup games, one Asian Games and one FIFA women’s World Cup. Cho scored a winning goal against Spain to help South Korea advance to the round of 16 at the 2015 Canada FIFA Women’s World Cup for the first time in history. Throughout her A matches, Cho scored 16 goals. 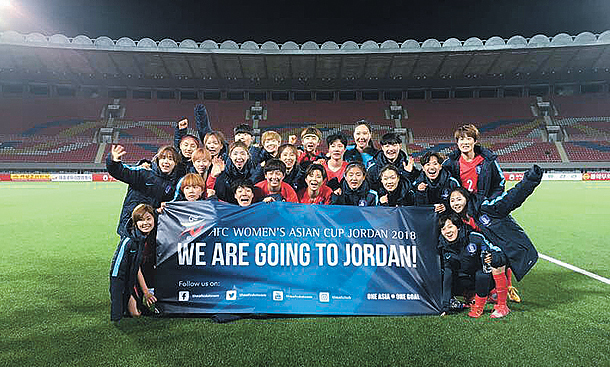 Whenever she was on the field, Cho forgot about her injuries or the score and just played ball. She didn’t hesitate to play hard against players twice her size. Specifically, Cho’s one-on-one defense is considered her best trait.

With Yoon as the team’s new manager, Cho was given another role of being the team’s strategic center. Cho’s main position is as midfielder, but depending on the formation, she moves to offensive positions or to the sides. Since the formation of the team changes depending on Cho’s position, the team named their strategy the “Cho So-hyun Shift.”