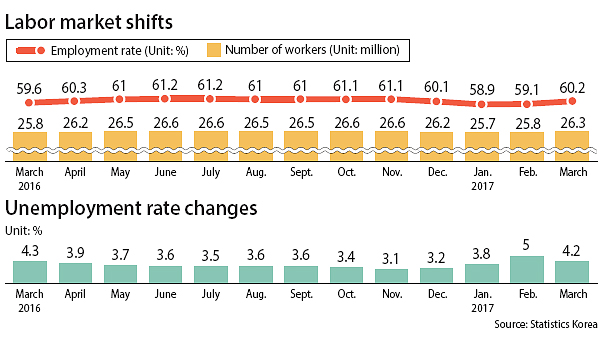 The labor market is showing signs of recovery as key economic indicators, including exports, domestic consumptions and investments, have started to improve, recent government data show.

The employment gains were the largest in 15 months, thanks to an improvement in retail, wholesale and the construction sectors.

The number of employees in Korea rose 466,000 year on year to a record 26.27 million in March, Statistics Korea said Wednesday.

The biggest gains were in the retail and wholesale sectors, where the number of employees rose by 116,000 compared to the previous year. The education services sector added 97,000 workers.

“The number of employees in the retail and wholesale industries and services sector rose significantly in March following the improvements in consumer sentiment and performance of the services sector,” said Kim Ie-han, a director at the Ministry of Strategy and Finance.

The health care sector also has been hiring. The statistics agency said the number of employees in health care rose 101,000 in March compared to the previous year.

“The number of hospitals in general rose and they hired more nurses during the graduation season earlier this year,” said Kim.

There are many other signs the economy is recovering. Korea’s exports have risen for five straight months and exports jumped 6.1 percent year on year in the first 10 days of the month. Domestic consumption in February increased 3.2 percent when compared to the previous month and the government also was able to collect more taxes during that time compared to a year ago.

The statistics agency said the overall employment rate was 60.2 percent in March, up 0.6 percentage points from a year ago, and the highest rate for March since 1997.

The number of unemployed increased to 1.14 million, down 12,000 from a year ago, and the unemployment rate also dropped 0.1 percentage points to 4.2 percent. The rate for those ages 15 to 29 fell 0.5 percentage points year on year to 11.3 percent, the government said.

The manufacturing sector, however, continued to be sluggish due to the ongoing corporate restructuring in the country.

In that sector, employee figures have been declining since July. The number of workers at the manufacturing sector, in fact, dropped 83,000 compared to the previous year.

“The manufacturing sector remains weak due to ongoing corporate restructuring in shipbuilding and other industries but the fall in the number of workers slowed as exports improved,” said Kim.

The number of employees in the manufacturing sector dropped 160,000 in January and fell by 92,000 in February.

Workers in the country in their 20s, 50s and 60s increased in number from the previous year, while those in their 30s and 40s decreased.

The Finance Ministry said there are signs of recovery in labor market but added that there still are various uncertainties that might drag it down once again.

“The labor market situation in the first quarter of this year was better than expectations but it is still true that there are various uncertainties both at home and abroad that might have a negative impact on the market later on,” said Kim at the Finance Ministry. “The government will execute the budget related to the job market as early as possible and will come up with more plans to boost domestic consumption, investments and exports, along with plans to help young Koreans find jobs.”

Some analysts said it is a bit early to say for sure that the labor market is on the upswing.

“It is too early to take the improved employment rate to mean it has become easier to find jobs in the country. I also think the recent statistics by the government aren’t that significant since the unemployment rate only went down by little bit,” said Seong Jae-min, an associate fellow at Korea Labor Institute.

“However, we can still have some expectations of economic recovery if the current pace continues for another three to four months.”