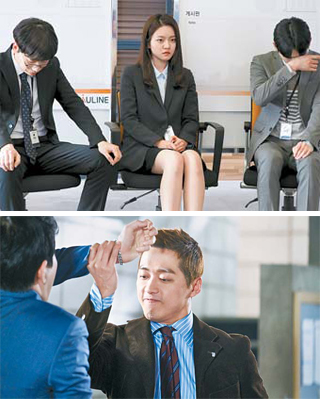 Scenes from MBC’s “Radiant Office” and KBS’s “Good Manager.” Once a setting for budding romances, dramas now portray the office as a war zone, influenced by the harsh realities that viewers face everyday in the office. [MBC, KBS]

“It’s hard to return a bed, but it’s too easy to fire non-regular workers like me. After you leave this office, I might have to leave the company.”

This is what Eun Ho-won, played by Go Ah-sung, says to an obnoxious customer trying to return the bed he purchased in an episode of MBC drama, “Radiant Office.” Eun even gets on her knees on the cold floor, but that is nothing compared to what others will do to appease the customer and survive in the company.

The office, which was once a setting for budding romance in past dramas, is now portrayed as a jungle, portraying an exhausting life behind the cubicles, regardless of position.

KBS’s “Good Manager,” which recently ended with a viewer rating of nearly twenty percent, depicted the struggles of an accounting department that was treated as a collection of incompetent workers. Assistant manager Yoon Ha-kyung, played by Nam Sang-mi, says, “I want to do something meaningful,” while chief of business operations Kim Sung-ryong, played by Namgoong Min, shouts, “Only the company doesn’t know. All of us know how dedicated Oh is,” as he attempts to stop one of his seniors from committing suicide.

Cable network tvN’s “Misaeng,” derived from the web-based comic of the same name, depicts the life of a non-regular employee Jang Geu-rae and his co-workers working at a trading company, was the pioneer of this change. Younger viewers sympathized with the non-regular employee Jang, while middle-ranking employees saw themselves in the struggles of manager Oh Sang-shik, a character who wisely leads his team through various hardships. In this almost documentary-like depiction, there was a noticeable lack of melodramatic or romantic story lines.

“There was a chronic malaise in Korean dramas due to the need to add a romantic subplot to every story, regardless of what genre the drama started off as,” said drama critic Gong Hee-jeong, “but after the success of ‘Misaeng,’ a drama’s ability to succeed even without the use of romance was seen, mostly due to the immense social pressure many can sympathize with even without the need of sub-plots.”

In the past, dramas commonly depicted protagonists new to a particular company finding themselves in relationships with high-ranking office managers or executives, and plots revolved around others interfering in order to break up the couple because of their perceived inequalities.

Gone are the days of love blossoming between minor clerks and CEOs.

Even executives are portrayed in a different manner. JTBC’s drama “Strong Woman Do Bong-soon” does feature a relationship between a CEO and the female protagonist played by Park Bo-young, but spices it up by highlighting the awkward power dynamics at play. Corporate executives aren’t as strict as they once were portrayed, while the children of those executives do not inherit their parents’ companies as they typically do, but instead successfully start their own companies.

Director of “Radiant Office,” Jeong Ji-min said, “Romance in the office is still portrayed as a way to turn the protagonists’ life around in soap operas, but in the mini-series that younger audiences favor, that trend is long gone. For the younger generation to whom the office is a war zone, the idea of getting into a relationship with a head of department isn’t going to arouse much sympathy. In ‘Radiant Office,’ we try to show the reality that some problems can’t be solved no matter how hard they try.”

“Recent office dramas all portray the issue of ‘how to adjust to new surroundings,’” said culture critic Kim Heon-sik, “‘Misaeng’ focuses on university graduate rookies; ‘Good Manager’ focuses on experienced employees while “Radiant Office” focuses on non-regular employees all attempting to adjust and survive in new environments. The current social atmosphere that views a company as a place where everyone fights for their survival rather than as a place to dream of romance is reflected in these dramas.”