When will robots take my job?

When will robots take my job? 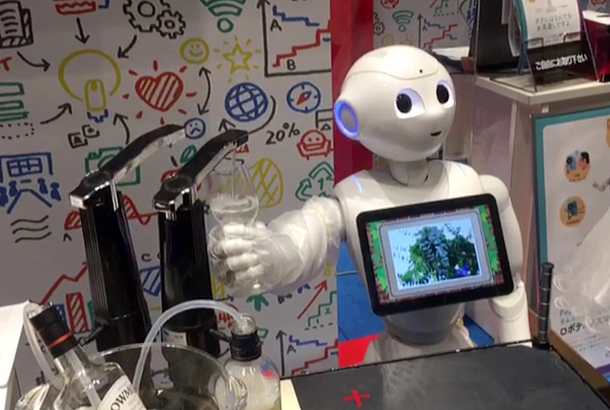 There is fear as much as expectation of the advent of a world of full automation, artificial intelligence and robotics. First, there is a threat to jobs. Human contestants won over computers in a translation contest hosted by Sejong University in February, but interpreters and translators fear their days are numbered for machines to replace their role and profession. Someone I know who is attending a graduate school of interpretation and translation said she was preparing to apply for a job in a large company because freelance jobs in her area of study do not guarantee a stable future.

More than 10,000 units of Pepper, the humanoid robot invention from Japan’s Softbank costing $2,000 each, already have been deployed. Caregivers cannot help but worry about their jobs upon hearing the robot tends to patients around the clock at a much cheaper rate.

Parents must discreetly choose the course of study and life for their children so that they won’t have to compete with intelligent and sturdy robots. The labor union of Hyundai Motor together with the Ulsan branch of the Korean Confederation of Trade Unions this month asked a research team at Incheon National University to study the impact of the fourth industrial revolution on automobile factory jobs.

Not all are pessimistic. The Wall Street Journal this week reported that retailers and logistics companies are struggling with a shortage of staff due to an explosive demand in online orders. Competition among warehouse workers sent their wages to the highest level in a decade. The starting pay for workhouse workers jumped 6 percent in the past year to $12.15 an hour in February, while the overall hourly earnings rose 2.8 percent across all professions in the same period. Amazon.com, which has a permanent warehouse work force of 90,000, hopes to recruit an additional 25,000 on a part-time basis by next year.

But the phenomenon may not last. Rising labor costs and difficulty in hiring has led logistics companies to accelerate automation in warehouse and delivery jobs. The job increases therefore could be temporary until robots arrive on the scene.

All this news is yet foreign in Korea. Despite heated demand in online commerce, wages in storage and the warehouse sector are stagnant. Unlike the U.S. where the unemployment rate hovers at a 10-year low, Koreans overwhelm in the profession that does not require experience, skills, or much education.

James Bessen, a professor at Boston University, claims that the biggest challenge from automation is not massive job losses, but finding other jobs for those who have lost theirs to machines. The U.S. also has not found a solution to this challenge.

Presidential candidates each claim they are better suited to usher the country toward the fourth industrial age of automation, digitalization and robotics. Voters want a vision from them on how they can be retrained and what kind of help they can expect from the state when machines steal their jobs in the future.