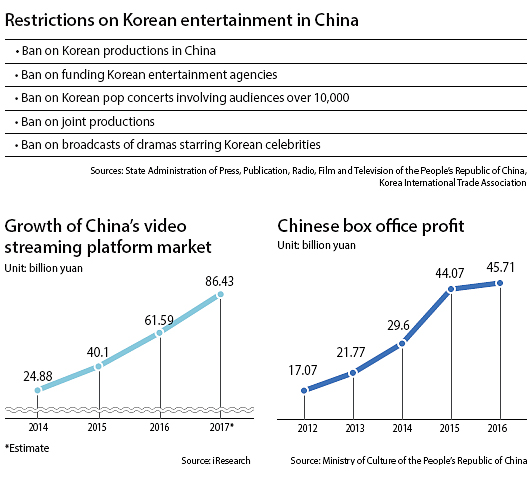 China’s entertainment industry is rolling in the money even after Beijing banned Korean pop content from the local market, prompting the Shanghai branch of Korea’s trade promotion agency to encourage Korean companies to seek alternative markets.

According to a report released Wednesday by the Korea International Trade Association, revenue earned by about 50,000 major Chinese entertainment companies amounted to 8.03 trillion yuan ($1.2 trillion), up 7.5 percent from the previous year.

China’s box office profit last year was 45.71 billion yuan, up 3.7 percent, and the number of moviegoers increased by 8.8 percent to 1.37 billion. The Korea International Trade Association forecasts China’s film industry could outpace Hollywood by 2021, growing an average 15 percent a year.

“Such rapid growth is largely due to the overall increase in China’s national income and strong support of the country’s government,” the trade group said in its report.

The Chinese are indeed spending more on entertainment. One Chinese person spent an average 760.1 yuan on entertainment in 2015, a 13.2 percent increase from a year earlier, according to the trade association.

And to bolster national culture, the government has restricted imports of foreign content. For instance, only 34 foreign films can be released per year, unless the movie is jointly produced with Chinese companies.

The restrictions have been even harsher on Korean content after Seoul decided to deploy a controversial U.S. missile shield known as Thaad that China believes could threaten its national security. After Korea announced its decision last year, China’s media regulatory agency enforced numerous bans on Korean entertainment imports. Actors and actresses have been barred from starring in Chinese TV programs and even pop groups have had big shows canceled.

“China’s trade retaliation against Korea is expected to continue for a while,” said Suh Wook-tae, head of the Korea International Trade Association’s Shanghai office. “Korean companies should actively look for alternative markets like Hong Kong, Taiwan and Southeast Asia.”

Some companies have already been making moves. SBS, one of the country’s biggest TV broadcasters, launched a dedicated Korean channel in Indonesia last month, and SM Entertainment, a major music agency, announced plans to enter the Indonesian market with local audition programs.

“Korea has been too dependent on China, which is why Korean businesses are so strongly hit by recent political issues,” said Kwak Joo-young, a business professor at Yonsei University. “It is time to look at relatively neglected markets like Southeast Asia.”