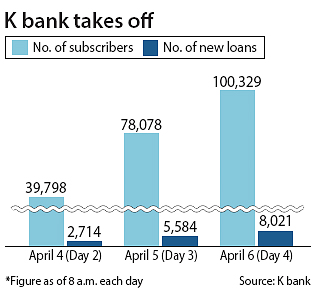 The successful debut of the country’s first internet-only bank has put mainstream commercial banks and savings banks on the defensive, prompting them to roll out financial products with favorable interest rates or offer new services to keep from losing business.

The popularity of K bank is a wake-up call for the old school banks, often criticized for their keenness to raising lending but not deposit rates.

To prevent their own customers from going over to the newcomer, banks scrambled to announce new products.

“The product releases don’t necessarily intend to counter the popularity of K bank,” said a spokesperson for Woori Bank. “But we tried to offer higher interest rates for clients who often use Woori Bank’s accounts.”

The product is designed for users whose monthly salary is deposited into their Woori Bank’s accounts and utility bills paid by autopay from them. 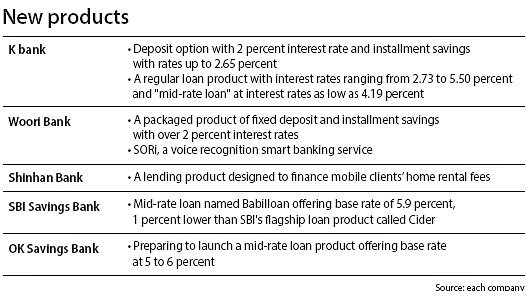 Shinhan Bank launched a loan for customers who need to finance jeonse and wolse lump sum deposits on residences. The lending rate starts from 3.18 percent.

While commercial banks in Korea may already be feeling some competitive pressure, it will only be worse for noncommercial banks, also known as second-tier lenders in Korea, according to Baek Doo-san, an analyst from Korea Investment & Securities.

“[Internet-only banks] will absorb some of the loan demand that would otherwise have gone to the second-tier lenders by placing themselves in between lending rates of commercial banks (at around 4.65 percent) and those of second-tier lenders (over 10 percent).”

To prevent an exodus of borrowers, local savings banks - which in Korea are actually consumer finance companies - began rolling out loan options that offer interest rates lower than before. SBI Savings Banks, for instance, unveiled the “Babilloan” earlier this month, with a lending rate starting at 5.9 percent, 1 percent lower than SBI’s flagship product called “Cider.” OK Savings Bank, another major second-tier lender, is reportedly in the process of preparing a new product whose base rate would start from 5 to 6 percent. The lending rate of OK’s flagship midrate loan starts at 9.5 percent at the moment.

To better compete with the internet-only bank, some banks are adding more advanced digital features to their mobile platforms.

Woori Bank introduced SORi, a voice-assisted smart banking service based on artificial intelligence. Users can give orders verbally to make transactions and withdrawals.

KEB Hana Bank launched a platform called Mobile Branch in which users can open accounts and take out loans without a subscription or registration process.

Asked how he feels about the Internet bank, Kim Doh-jin, CEO of Industrial Bank of Korea said he was “frightened.”

Wi Sung-ho, CEO of Shinhan Bank, said that the ultimate competitor of banks are information and communication technology companies.