‘We should have two-and-a-half shipbuilders instead of three’

‘We should have two-and-a-half shipbuilders instead of three’ 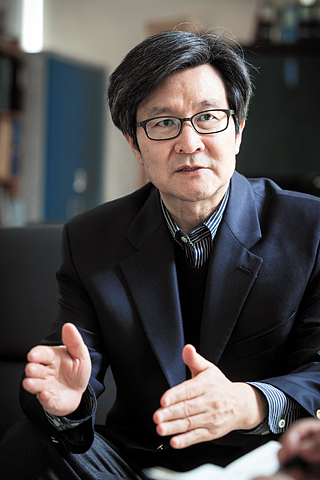 While Daewoo Shipbuilding and Marine Engineering is stranded, the Chinese are catching up at an alarming speed, while Japan is showing signs of a comeback.

The biggest question today is where will the Korean shipbuilding and marine industry head? Kim Yong-hwan, Seoul National University professor of naval architecture and ocean engineering, said the best way forward is to provide DSME the opportunity to survive while allowing the company to focus on its skilled area, which is building ships, instead of dismantling the company.

In order to do so, there should be efforts to convince shareholders as well as the public. Kim said it was certain that the shipbuilding is not an industry that is a fading industry as there have been continuous demands in replacing outdated ships. “We should find a way of survival through next generation ships such as environment-friendly or green ship or autonomously driven ship or smart ship,” Kim said.

The following is JoongAng Ilbo’s interview with Kim.

Q. What has happened in the last couple of years where the shipbuilding and marine industry, which has been one of the biggest contributing industries to the Korean economy, suddenly made a sharp turn?

A. Since World War II, the shipbuilding industry has been shifting from Europe to Japan and then to Korea. However, in the history of the shipbuilding industry, there haven’t been precedents as the one we see today where the No.1 country in this field has seen such a sharp downfall. Since Korea became the No.1 country in ship orders in 1993, and until the global crisis of 2008, the top three shipbuilders — Hyundai Heavy Industries, Samsung Heavy Industries and Daewoo Shipbuilding and Marine Engineering — were making several trillion won in profits. But in the last couple of years, they have suffered several trillion won deficits.

Intoxicated with the success of its shipbuilding business, they jumped into unfamiliar offshore plant [businesses] and now are stuck in the mess that they are in.

The big three shipbuilders’ responsibility is huge. The crisis that the Korean shipbuilding and marine industry faces today is because these companies resorted to cutthroat practices, lowering the price of orders in the hopes of diversifying their shipbuilding business while recklessly jumping into offshore plant businesses.

There’s also one more cause. If the primary problem was the arrogance and strategic failure of the three companies’ managements, the government’s inability to act made matters worse.

What happened in the offshore plants?

The shipbuilding industry saw a sharp drop in orders after the shipping industry fell into stagnation after the global financial crisis of 2008. But as international crude prices started to rise, offshore plants rose as an alternative [to shipbuilding].

At first, there were several successful cases, and as a result, all three [shipbuilders] were further encouraged. There were the cases of Hyundai Heavy Industries’ Kizomba project on the coast of West Africa and the drill ship orders on Samsung Heavy Industries and Daewoo Shipbuilding and Marine Engineering.

What is the fundamental difference between shipbuilding and offshore plants?

Global players like France-based Technip and SBM are spread across Europe and the United States. These are companies with high-standard technologies that make roughly 10 trillion won in a year while only taking one or two orders that take decades each. Under such circumstances, the top three Korean shipbuilders since 2010 have boldly jumped in, thinking they could do it all on their own. Additionally, they accepted orders beyond their capacity. No wonder [the Korean companies] got indigestion.

Is the risk in the offshore plant business controllable?

This is an industry whose size is so massive, it’s lucky companies can make huge profits. But if things don’t turn out as planned, the impacts that follow are massive. There are a lot of risks. Among the 8.5 trillion won deficit that the top three [Korean shipbuilders] incurred, 7 trillion won was contributed by the offshore plant business. This crisis started from the misjudgment of managements who weren’t able to distinguish what they can and cannot do.

Late last month the government released a plan to help Daewoo Shipbuilding and Marine Engineering. How do you think it should have been handled?

There’s a tension between those who say the companies should undergo restructuring so that there should be only two major shipbuilders and those who argue we should maintain the status quo with three shipbuilders. I would like to take the moderate position of two-and-a-half shipbuilders. We should encourage the revival of Daewoo by specializing the shipbuilding business, which the company is good at, while downsizing of the company. I suspect this would be somewhere in the middle of the Financial Services Commission and the Ministry of Trade, Industry and Energy.

The cutting-edge technology and the large production facilities of Daewoo, which once competed for the second and third place in the global market, is a national asset. Whether it be designing or building, Korea is the best when it comes to building ships. Daewoo is second to none when it comes to the building techniques of LNG delivery vessels and submarines.

It would be best if Hyundai or Samsung acquires Daewoo. But I don’t think [these two companies] have the [financial] reserves to do so. Daewoo needs to undergo rigorous restructuring while working to find a new owner in the private sector. It shouldn’t be dabbling in nonessential areas like wind power or golf clubs while cutting down half its product lineup. I believe it is right to give Daewoo another chance as the shipbuilding market has hit bottom last year.

Where do Korea’s shipbuilding and marine industries stand competitively in global terms?

Simply put, there are no others who can match the technology when it comes to building ships. Especially [Korean companies] excel in high value-added ship technology such as large-size container vessels and LNG ships. Although China became the world’s No.1 in ship orders, 70 percent of those orders are mid-to-low priced vessels such as bulk and tankers, while half of Korean companies’ portfolios are those with high added value.

What is your outlook on the shipbuilding market?

For nearly 10 years, the [global] shipbuilding industry has sailed through some of the most difficult waters. While orders shrunk, the players were in a game of chicken largely due to the entry of latecomer China. After going through the worst last year, there are expectations of bouncing back after hitting bottom.

Of course it is not enough. Last year the global order on ships were roughly 13 million compensated gross tons. This year orders are expected to be between 15 million and 20 million. The production ability of the top three Korean shipbuilders is at 14 million CGT.

But even if we succeeded in taking 30 percent of the orders, it fails to reach even half of the production capability. But if we cut that production facility in half, what will happen when the market is bullish?

Some experts project that global orders five years from now will be between 20 million and 30 million. In such good times, we need to at least secure 10 million CGT orders.

What should be the direction of the Korean shipbuilding industry?

Although the industry should be left to make free decisions, the role of the government is important. We shouldn’t be cutting off the arm and legs as part of a restructuring.

When the shipbuilding market improved in the late 1990s, Japan tried to recapture its past glories but was unable to quickly recover its downsized production facilities.