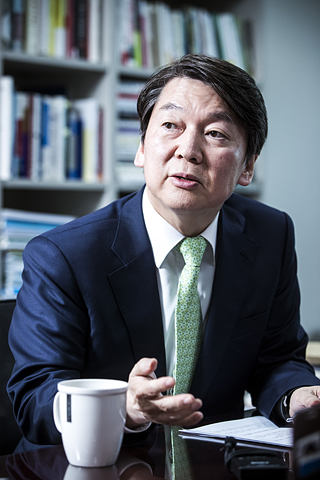 People’s Party presidential nominee Ahn Cheol-soo said if he was elected president on May 9 the first thing he would do as president would be to accept the resignations of all ministers appointed by former President Park Geun-hye except for Defense Minister Han Min-koo.

In an interview with the JoongAng Ilbo Wednesday in his National Assembly office, the nominee said he had made that exception because he “prioritizes national security.” But working with other cabinet members from the Park administration would “carry more risk,” he said.

Upon accepting their resignations, the 55-year-old nominee said he would steer national affairs with vice ministers until he completes forming his own cabinet.

On growing tensions in the region, Ahn said he would send former United Nations Secretary General Ban Ki-moon to Washington as a special envoy to arrange a summit with President Donald Trump. Ahn said it was a “golden time” to improve relations with the U.S. as the Trump administration is in its first months.

On rival Moon Jae-in, who has attacked the Ahn candidacy as being backed by a corrupt establishment trying to maintain the status quo, Ahn lashed back, saying he could not believe Moon could characterize him as being corrupt. Ahn stressed that he would not “forge a political alliance” with the conservative Bareun and Liberty Korea parties for the sake of winning their support and their voting base. “It is Moon who wants me to join hands with pro-Park [Geun-hye] forces who opposed her impeachment,” said Ahn. “His genuine wish that I make such a move leaves me speechless.”

On the Seoul-Washington alliance, Ahn expressed confidence that he would forge a close partnership with President Trump, noting that he and Trump are both alumni of the Wharton School of Business at the University of Pennsylvania.

Making clear his determination to use all of his political capital to win the election, Ahn said he would resign from his parliamentary seat when he officially registers as a presidential candidate, saying he was ready to give all for victory on Election Day.

Below is an edited interview with Ahn.

Q. How do you feel facing off against Moon Jae-in - once again - as a presidential contender.

A. I have led my political career always looking to the people. I decided to run because I think myself better (than Moon) in vision, policy, philosophy and leadership. And I have proved my qualifications (as a leader) by transforming words into action. During an interview on Jan. 4, when my approval rating was less than five percent, I foresaw this year’s election would be between Moon and myself.

Some say your current high approval rating is a bubble stemming from support from centrist conservatives, who have chosen you over the two other conservative candidates because of their slim chances of winning. How do you plan to keep them as your base?

Calling their support a bubble is an expression that belittles the people. Such an attitude is what I consider to be the kind of politics-as-usual that should be discarded.

Moon said the political force that is supporting you is a conservative bloc trying to maintain power through your presidency.

I made it clear that I will not join hands with the political conservative bloc. It is the Democrats who wholeheartedly want me to cooperate with the former ruling party (for political reasons).

But your party only has 40 lawmakers. It will be hard to govern with such a number.

This is an election to elect a president. Judgement should be made based on how competent one is as well as how capable one is of forging national unity. If the People’s Party wins, we will be a minority ruling party versus a majority opposition. But the same is true should the DP win power. I believe in the flow of history and the people’s collective intelligence. I am convinced of my victory.

If elected, will you give government positions to people from the DP and the Liberty Korea Party?

You criticize Moon’s plan to create 810,000 jobs in the public sector.

The private sector should be at the forefront of a crusade for job creation. The government is there to lay down a foundation and support such efforts. And through such efforts, new government jobs would come about, not vice versa. Financing new jobs in the public sector out of the state coffers is another problem.

What will be the first thing you do as president?

On May 10, I will be sworn in as president at the National Assembly - without an inauguration celebration - and I will take up my duties right away. I will accept the resignations of all cabinet ministers from the Park government on May 10, except for Defense Minister Han Min-koo. The first appointment I will make will be the national security adviser for the president because I prioritize national security.

How will you handle Korea-U.S. relations?

National security will be the first thing I will address as president upon election. This is a golden time to set anew relations with Washington as it has been less than six months since President Trump was inaugurated. I will dispatch former UN chief Ban Ki-moon as a special envoy to the U.S. so that we can arrange a summit with Trump as soon as possible.

So Trump would be the first foreign counterpart you meet with?

It will be a meeting of utmost urgency. Trump and I both went to Wharton School of Business and we were both businessmen. I am confident that the two of us will be able to solve any problems through dialogue.

You have changed your position on the U.S.-operated Terminal High-Altitude Area Defense system (known as Thaad) from opposing it to supporting it. Critics say you changed your stance to appeal to conservatives at a time of growing concerns about North Korea’s provocations.

It becomes a national crisis when a leader remains stubborn in a stance when there is a shift in circumstances. In diplomacy, the most important objective is the national interest. The Park administration seriously damaged the national interest because it didn’t bother persuading China to accept our decision (on Thaad). So I criticized it heavily (last year). But now we have Thaad on our soil. A responsible leader must persuade Beijing (of our need for the missile shield). As president, I will address two points to China: Firstly, North Korea’s nuclear program is a serious matter to the national security of South Korea. And Seoul must deal this matter with its ally, Washington. Secondly, if there is instability on the Korean Peninsula, it harms China’s interests.

We have to address the economy and national security on a two-track approach for our best interest. And we must inform Washington of our resolute opposition to war under any circumstances. The fate of our nation must be decided with Korea taking part in process.

Even if you lose, you still keep your status as lawmaker. How would you deal with that?

Giving up a parliamentary seat is what a responsible politician would do in this situation. Even lawmakers who bid for heads of provincial governments forsake their seats before election. I will explain to my constituents (in Nowon District, Seoul) of my decision to give up my assembly seat. I am betting all I have this time.