Kim Chong-in drops out of race after a week

Kim Chong-in drops out of race after a week 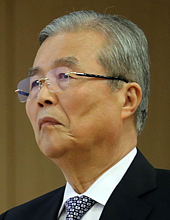 The announcement came a single week after he launched his campaign, promising to “bring stability to the country and comfort to the people” as the “best mediator of various factions and figures.”

In an exclusive interview with the JoongAng Ilbo earlier Wednesday morning, Kim said he had been scanning through recent election polls and came to the realization that “the public doesn’t want me.”

In the latest Realmeter poll, conducted last Friday and Saturday, Kim was favored by only 0.8 percent of 2,244 voters nationwide, coming in sixth place.

When asked whether he would support either Moon or Rep. Ahn Cheol-soo of the minor opposition People’s Party, whose approval ratings shot up in recent days just below Moon, Kim replied he would “no longer play the role of kingmaker.”

“Moon is hegemonic,” Kim said during the interview with JoongAng Ilbo, “and his weakness is that he’s swayed by his aides. If he personally doesn’t change, winning the presidential election will be difficult.”

On the chances he will back Ahn, Kim snapped: “I don’t think he has what it takes to become president.”

Kim worked as interim chief of the Democratic Party, with which Moon is affiliated, and served as a proportional representative before he quit last month, giving up his National Assembly seat.

The veteran politician had protested the party’s management, accusing Moon loyalists of dominating it. Kim was planned to run in the presidential election as an independent.

Kim said in a statement Wednesday, “I lacked the strength to win the hearts of the public.”