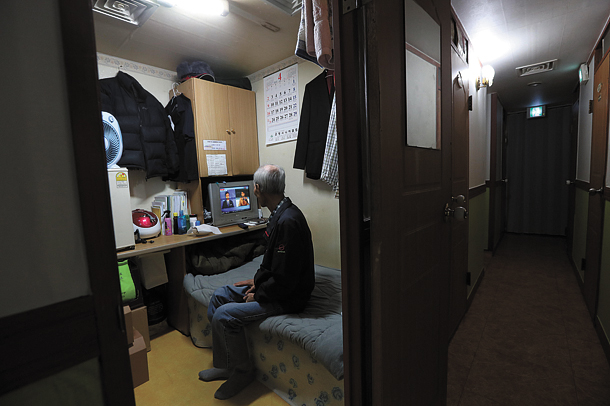 Kim Byeong-guk, 82, spends his days at a gosiwon, a small one-room apartment, in Nokbyeon-dong, Eunpyeong District, northern Seoul. Kim is not eligible for benefits from the Korea Basic Living Security Act as he has five children. [KIM SANG-SEON]

Yun, 55, has much to say about her older brother’s less than filial conduct toward their 89-year-old mother.

Left bereaved at an early age, Yun’s mother experienced all sorts of hardship and did what society expected of her; she sent her son to college and purchased a house for him after he got married. However, her son did not support her in her twilight years in return.

“My older brother has considerable assets and even receives a pension,” said Yun. “I proposed to my older brother to share in the responsibilities of a parental allowance, but he rejected the idea.” Yun had no choice but to seek out the Korea Legal Aid Center for Family Relations and explain her predicament.

Just 15 years ago, seven out of 10 people in Korea believed children were responsible for setting aside an allowance for their parents. Now, only three out of 10 think this way.

On the other hand, the number of those who believe the government and society must also be responsible increased from 18.2 to 45.5 percent in the same period, according to Statistics Korea.

The transformation of Korean customs and values is taking place everywhere. Siblings such as the Yuns quarrel and parents and their children are at odds over filial duties.

There were 183 consultations provided by the Korea Legal Aid Center last year regarding parental support, compared to 49 in 2006.

Parents are even filing lawsuits against their own children to force them to provide support. According to the Supreme Court, there were 239 suits filed in 2015. In the first half of last year, 103 cases were accepted.

Recently, a 32-year-old woman surnamed Park found out that her father, who divorced her mother when Park was young, filed a lawsuit against her. Park had sent him living expenses over the course of the last few years, but upon learning that he was spending the money on gambling, she stopped, and he then sued her.

In another case, a 69-year-old woman is contemplating forcing her 35-year-old son to make payments. She lived in her neighborhood with her son and looked after her grandson until the child was six, while also helping with housework.

But after she sold her home, all contact ceased between them after a fight three years ago. Only after the money from her apartment was gone did she then consider suing her son.

There are two regulations relevant to the matter. Article 974 of the Civil Code stipulates the duty of support for daily sustenance between a blood relative or a spouse.

The National Basic Living Security Act stipulates the duty of support between parents and their children and spouses. The Basic Living Act is subject to the provisions of the Civil Code.

Starting in July of next year, 260,000 people will be excluded as dependents from their siblings’ workplace healthcare policies. The scope of support will therefore be reduced to only include parents and children and this, too, may evaporate following the presidential election on May 9.

Moon Jae-in of the Democratic Party, Ahn Cheol-soo of the People’s Party, Yoo Seong-min of the Bareun Party and Sim Sang-jeung of the Justice Party have all promised to examine the filial support system. Moon and Ahn have proposed its gradual elimination.

But in light of the fact that Korea is a rapidly aging society, the perpetuation of the system makes increasingly less sense.

Chang Eun-sun, 80, was diagnosed with cancer last August and moved to a senior care center in Cheonju, North Jeolla, but she is still obligated to take care of her mother, and soon there will be many more cases like hers. Moreover, because her mother has four sons and three daughters, she is not eligible to receive benefits guaranteed by the Basic Living Act.

“How much longer will my mother live?” asked Chang. “It is unreasonable for the country to support those without children and provide nothing for those with children.”

Though Kim Byeong-guk, 82, lives alone in a gosiwon, a tiny one-room apartment in Eunpyeong District, northern Seoul, he is unable to qualify as a beneficiary of the Basic Living Act as he has five children.

A JoongAng Ilbo reporter met with him on the afternoon of April 4. The room was just large enough to fit a desk, a storage closet and a mattress. The only window to the outside world was a 10-inch television with a choppy screen.

His monthly income, including the basic pension and income from his senior employment promotion program, was a combined 370,000 won ($324). He paid the room’s rent of 250,000 won, a 20,000 won phone bill and had a mere 100,000 won left to spare for living expenses. Although his income does not meet the minimum requirement of the basic living act, 500,000 won a month, he is ineligible for benefits because his children’s income or assets exceeds the limits stipulated for familial support.

There are 1.17 million other people in situations like Kim’s. But instead of abolishing the filial support system, some believe that what is needed is proper enforcement.

“The familial support system must be maintained for the sake of the culture of filial piety,” said Lee Shim, the head of the Korea Senior Citizens Association. “Even when parents raise their children well, there are many cases of them being thrown away. Rather than relaxing the familial support system, it would better if those who violate existing conditions are punished.”

“If the familial support system is eliminated,” said Bae Byeong-jun, director general of healthcare policy at the Ministry of Health and Welfare, “people will pass on their assets to their children and become pensioners. This must be distinguished from welfare.”

According to the National Assembly Budget Office, the financial cost brought on by the elimination of the filial support cap would be 9.3 trillion won next year, and in the next five years, it could cost up to 50 trillion won.