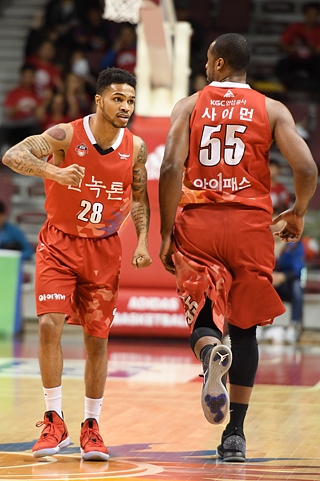 The foreign duo of the Anyang KGC, Keifer Sykes, left, and David Simon during its second semi-final game of the KBL Playoff Championship, against Ulsan Mobis Phoebis at the Anyang Gymnasium on Wednesday. [KBL]

The foreign duo of Keifer Sykes and David Simon of Anyang KGC are once again dominating the court, and with their help, the KGC won its second game against Ulsan Mobis Phoebus 82-73 on Wednesday.

All 19 teams that won the first two games in the semi-final round have advanced to the finals, played in a best-of-five format.

Although Simon was the leading scorer with 29 points, the fans went crazy for Sykes. With his fancy dribbling and quick movements, Sykes fought through his opponents and scored multiple points for the KGC. At the end of the third quarter, Sykes heated up the stadium by successfully making a one-hand dunk. Throughout the game, Sykes recorded 18 points and made seven assists.

Under Korean Basketball League (KBL) regulations, teams can have one foreign player each who is shorter than 1.93 meters (6 feet 4 inches) per team. KGC’s foreign player is Sykes, playing this season in the KBL for the first time. At the beginning of the season, Sykes was on the verge of getting kicked off the team, but in the sixth round of the KBL regular season, he was selected as MVP of the week, averaging 21.3 points with six assists. Since then, he became one of the key players for the KGC.

Over the 2016-17 regular season, Sykes averaged 15.1 points with three rebounds and 4.6 assists per game. Sykes played a significant role for the KGC, scoring double digits in the last six games in the KBL regular season.

“We struggled in the first quarter but our team figured out a way to win,” Sykes said after the game. “Since it’s a long journey, like a marathon, I want to show improvement throughout the games, until the final round.”

The KGC won the KBL’s 2016-17 regular season and hopes to win its second KBL playoff championship title, which they last won in 2011-12. Although their semi-final opponent, Phoebus, finished the regular season fourth, they’re a strong team, winning the postseason championship six times and finishing runner up three times.

Only one win away from advancing to the final round of the KBL Playoff Championship, the Anyang KGC will travel to play its third game against Phoebus at Dongchun Gymnasium in Ulsan, on Friday.

Upon completion of the semi-final round, the first contest will begin on April 22, with a best-of-seven format.