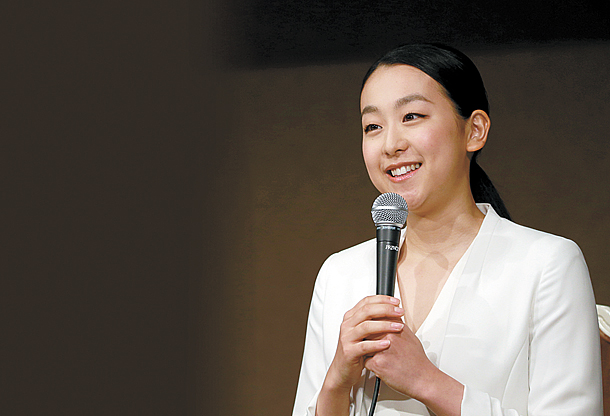 Mao Asada, once the greatest female ice skater in history, retired this week. 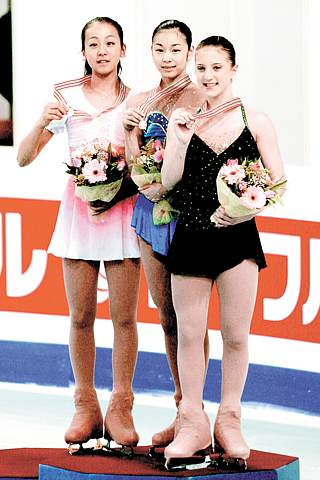 Kim Yuna and Asada were rivals from their junior career until 2014, when Kim retired. Similar in height and physique, they were the world’s most famous skaters, representing Korea and Japan.

Although fans will no longer be able to watch the two skaters at the Olympics, the two are likely to meet in Pyeongchang next year as Kim is the 2018 Games Ambassador and Asada will likely be a figure skating commentator.

At age 14, the two first met at the Junior Grand Prix in Helsinki, Finland, in December 2004. Asada successfully performed a triple axel and beat Kim by a huge margin with 178.83 points. Up until the age of 14, Asada was a big wall for Kim.

“Even during practice, Mao didn’t make any mistakes in her jumps,” Kim said in her autobiographical novel. “I’ve never seen her tripping in her triple axel.”

In Kim’s first season as a junior from 2004 to 2005, Asada finished well ahead of Kim in all the tournaments. Japan boosted Asada’s figure skating career by building a 15 billion won ($13.3 million) ice rink for her to practice all by herself, whereas Kim had to practice at a public ice rink in an amusement park early in the morning or late at night. 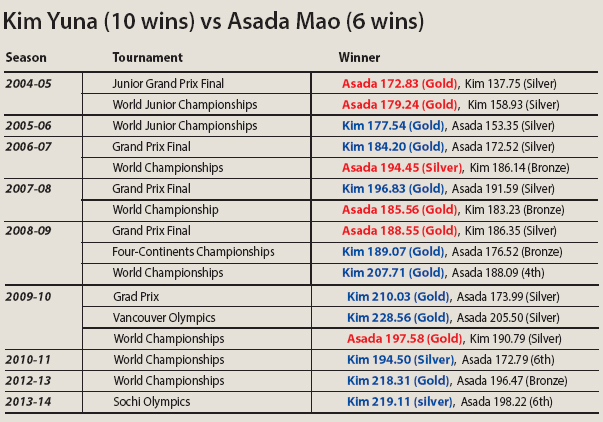 But in a few years, Kim slowly caught up with her rival. Asada soon felt the heat of trying to maintain her top spot. To do so, she focused on the triple axel. As she became older and therefore heavier, the success rate for a triple axel began to go down since she was no longer able to jump as high.

When Kim left to Canada for off-season training, she focused heavily on her expression and on being more concise with her movements. Rather than learning the triple axel, Kim focused on jumping more cleanly and from that, she became the textbook definition of figure skating jumps.

Asada’s plan to master the triple axel was a success until the 2007-08 season, before which she won four out of seven events, but after, Kim turned the tables, winning seven out of nine events.

“Winning against Asada isn’t my primary reason for skating,” Kim said when asked about the rivalry. 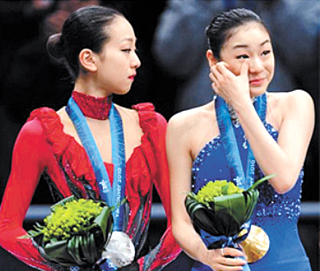 The highlight of their rivalry was the 2010 Vancouver Winter Olympics. Asada was highly praised for her clean performance. But shortly after, Kim set a new world record with 78.50 points.

Two days after, Kim performed ahead of Asada and scored 150.06 to finish the event with a total score of 228.56 points. Asada made mistakes in her jumps. As a result, Kim won, setting another world record for her total score and Asada took silver.

Upon completion of the Olympics, Kim continued to focus on her game. She took a year off after the 2011 World Championships.

“I will retire after the 2014 Sochi Olympics,” Kim said when she returned after a year-long break. 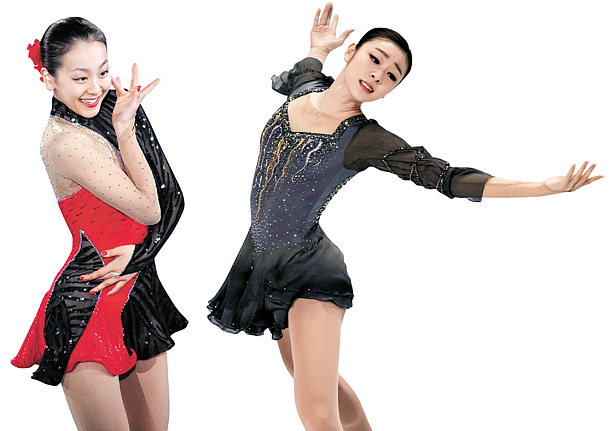 Just as she said, after Kim won a silver medal at the Sochi Olympics, she retired without regret.

Meanwhile, Asada hesitated to follow suit and still hoped to win an Olympic gold medal, which would not only benefit her but also the Japan Skating Federation, which receives part of Asada’s sponsor earnings. But Asada was already past her prime.

In Asada’s most recent event, she finished 12th at the Japan Figure Skating Championships, making many wonder whether she would participate at the Olympics. Finally, she announced her retirement on Monday.

“I’ve competed with Mao for more than ten years,” Kim said in 2014. “I don’t think there’ll be skaters like us who can build this much rivalry.

“Kim Yuna and I motivated each other,” Asada said during her press conference on Wednesday. “We helped each other develop as better skaters.”