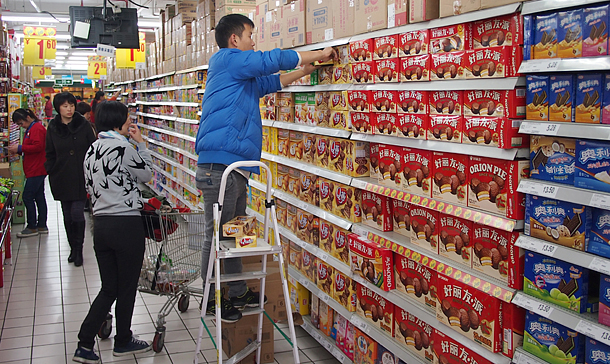 Boxes of Orion’s flagship product, Choco Pie, filled shelves at a discount chain in China in 2013. The product raked in 200 billion won (177 million dollar) in Chinese sales last year, but its production in China was recently reduced in the aftermath of the decision to deploy Thaad in Korea. [JOONGANG ILBO]

The company said Thursday that it recently reduced production in China as a response to a decrease in demand, possibly a result of the anti-Korea sentiment that arose in the aftermath of the Korean government’s decision to deploy Thaad, or the U.S. antimissile system, in March.

They each raked in more than 200 billion won ($177 million) last year in China alone. About 56 percent of the company’s sales in 2016 came from China.

“Our product is food so we can’t simply store them stacked up in piles,” said a source at Orion, stressing the measure is a natural decision in inventory management: If sales are down, production is too. Orion declined to disclose how much revenue it has lost since the Thaad issue.

Orion, which entered China in 1993, was originally not seen as a foreign brand there for some time, as the company conducted business under a different brand name: Hao Li You, meaning “good friend” in Chinese.

However, the company also was affected by anti-Korean boycotts after local media outlets incorrectly said the confectionery was a Lotte subsidiary in late February. Korean conglomerate Lotte was battered in China for providing land for Thaad.

Orion was forced to make a statement that it wasn’t linked to Lotte, but this incident made clear to the Chinese public that Choco Pie’s manufacturer was Korean.

Orion is not the only company that has cut production in China. Frozen relations between Beijing and the Korean government over Thaad deployment has led to a boycott of Korean companies and retailers in the last few months.

Hyundai Motor’s Chinese factory in Cangzhou halted production for nine days between Feb. 24 and April 1. The company explained that it suspended operations to conduct several inspections and improve its operation capacity, but analysts speculated that the hiatus was from increased inventory due to slower sales. Construction on the factory was just completed in October.

The factory in Beijing was run by a joint venture of two Chinese companies and SK Innovation that held a 40 percent stake. SK said the decision came from tightened regulations on the market and added that the decision was irrelevant to Thaad, as the factory’s operation was overseen by its local partners.