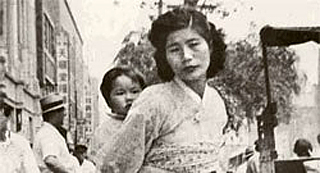 Park Nam-ok, who became Korea’s first female film director with 1955’s “The Widow,” passed away at the age of 94. [WOMEN IN FILM KOREA]

In the early days of the Korean film industry, Park Nam-ok was a pioneer, becoming Korea’s first female director in 1955 with her debut film “The Widow.”

Park died in Los Angeles on April 8 at the age of 94, according to Women in Film Korea last week.

“We heard of the news through email from [Park’s] family. Due to her age, she is known to have stayed at a convalescent hospital for some time,” said a source from the organization.

Born in 1923 in Hayang, North Gyeongsang, Park threw shot put while attending Gyungbuk Girl’s High School. She even set a record at what is now known as the National Athletic Competition.

Though she also showed excellence in other events, like the high jump, she was forced to give up on her talents due to her parents’ disapproval. Pushed by her parents, Park studied at the Department of Domestic Science at what is now Ewha Womans University. She was immersed in literature, art and film at university.

When her parents pushed her to get married, she dropped out of school to work as a newspaper reporter in Daegu. She sometimes wrote movie reviews, and later had the opportunity to work as a scriptwriter for the film, “A New Oath” (1947).

After marrying scriptwriter Lee Bo-ra in 1954, she directed her own movie “The Widow,” based on a script written by her husband, and became Korea’s first female filmmaker. She even came to set while carrying her newborn on her back.

She was gradually forgotten by the public when she left for the United States in 1992. But she once again came into the limelight when director Yim Soon-rye included her life as well as other early female cineastes in a 2001 documentary, “Keeping the Vision Alive: Women in Korean Filmmaking.”