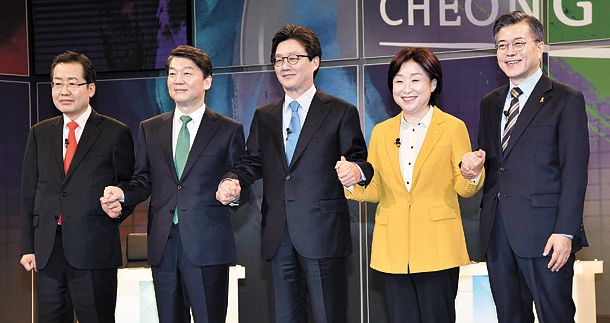 Five presidential candidates pose for a photo before the first debate Thursday in the studio of broadcaster SBS in Seoul. From left: Hong Joong-pyo of the Liberty Korea Party, Ahn Cheol-soo of the People’s Party, Yoo Seong-min of the Bareun Party, Sim Sang-jeung of the Justice Party and Moon Jae-in of the Democratic Party. [JOINT PRESS CORPS]

Five presidential candidates vowed to prevent military conflict on the Korean Peninsula through strenuous diplomatic efforts with Washington and Beijing during the first campaign debate Thursday as geopolitical tension mounted.

The Thursday debate was the first of five planned among the nominees from five political parties leading up to the May 9 snap presidential election. The stakes are particular high for the two leading candidates, Moon Jae-in and Ahn Cheol-soo, given the shortness of the campaign period and their growing closeness in the polls.

The five participants were Democratic Party nominee Mon Jae-in, People’s Party nominee Ahn Cheol-soo, Hong Joon-pyo of the former ruling Liberty Korea Party (LKP), Yoo Seong-min of the Bareun Party, a splinter of the former ruling party, and Sim Sang-jeung of the progressive Justice Party. The debate was recorded at the studio of broadcaster SBS in Seoul from 10 a.m. and was scheduled to be aired at 10 p.m.

Asked how each would deal with a possible preemptive U.S. military strike on North Korean military facilities, Democratic Party nominee Moon said he would call the White House and insist that it could not make a unilateral attack on the North “without the consent” of the South Korean government.

“Then I would activate a state of emergency and place the military on the highest alert. And then I would demand the North stop provocations via a hotline and ask Beijing for cooperation,” said Moon, who is frontrunner in the polls.

Ahn appeared to concur with Moon, saying there “must be no war” under any circumstances. He also said he would make calls to the heads of the two superpowers with haste.

Echoing an earlier comment that he could work well with Trump because they both attended the same business school, Ahn noted, “I will tell Trump, who is an alumnus of the Wharton School [of Business], that there must be no war no matter what.” He added that he would also demand President Xi Jinping of China exert pressure on Pyongyang to refrain from provocations.

The two leading candidates’ remarks underscore a common sentiment that a pre-emptive strike on the North by the U.S. could lead to a full-fledged combat, a resumption of the 1950-53 Korean War, that has been suspended in a truce. A full-blown conflict could claim the lives of millions on both sides, particularly in Seoul and its adjacent cities, where more than 20 million people reside just 50 kilometers (31 miles) from the inter-Korea border.

The three other candidates expressed similar opinions, saying they would all strive to prevent a military conflict. Hong of the Liberty Korea Party, arguably the most hawkish on North Korea, said while it was important to prevent a pre-emptive strike by the U.S., he would order a special military mission to take over the North in case the U.S. strikes.

Yoo of the Bareun Party said a pre-emptive strike by Washington should be seen as a preventive defense measure. “The military should be fully prepared for combat in such a case,” he said.

Sim of the Justice Party, the only female candidate, said she would make it clear no military conflict would be allowed as president.
Reflecting the tightening race between them in the polls, Moon and Ahn exchanged sharp words.

Ahn focused on Moon’s description of his candidacy being supported by a corrupt establishment, saying such an attack was an “insult to the people” as it implied that members of the public who support Ahn belong to a corrupt class.

“You said my supporters belong to the corrupt group,” snapped Ahn.

Moon refuted Ahn’s criticism by claiming out that LKP lawmakers who opposed former President Park Geun-hye’s impeachment are now supporting Ahn. Moon then brought up the People’s Party’s stance that it could work with the LKP in alliance if it wins power.

On the economic front, Moon said growth should be engineered by an increased income level for salaried men and women and called for narrowing the income gap between small to medium size companies and conglomerates. He also said poor conditions of contract workers should be improved.

Stressing the need for more government aid for the self-employed, Moon vowed to increase the minimum wage by 2020. Reaffirming his plan to create 810,000 jobs in the public sector, Moon said the public sector “should taking a leading role” in job creation because “the private sector has been failing to do so.”

Ahn agreed that the income gap between salaried and contract workers should be narrowed.

To Sim’s criticisms that he had switched his stances on national security issue, such as a previous objection to the deployment of a U.S.-operated missile defense system, Ahn countered that a leader should always put priority on the national interest in changing circumstances.

“It is easy to maintain one’s stance unchanged all the way and avoid criticism. But a national leader cannot do that. He or she must address an issue by putting the national interest at the forefront,” said Ahn.

The second debate is scheduled for Wednesday.