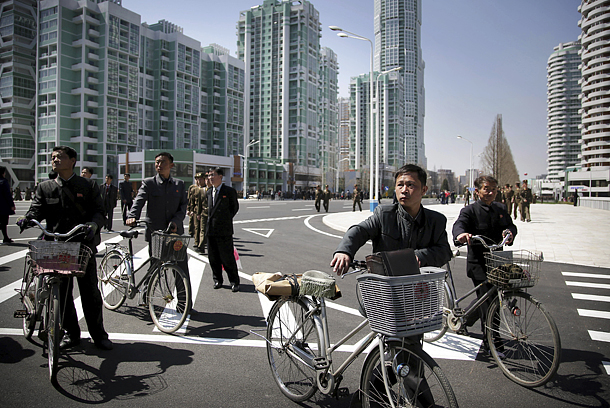 Four words from North Korean authorities Thursday morning were all it took for South Korean media to plunge into a jittery guessing frenzy: foreign journalists were invited to cover a “big and important event.” No further details were given.

The terse invitation instantly went viral here, with some speculating that the North could show off an intercontinental ballistic missile that was in its “final stage” of development.

Then the tweets poured in a little before 2 p.m.

“Ryomyong Street, a major new residential development,” wrote Jonathan Kaiman, the Beijing bureau chief of the Los Angeles Times, who was in Pyongyang to cover the 105th anniversary of the birth of North Korean founder Kim Il Sung, which falls on Saturday.

“Kim Jong-un himself made an appearance,” Kaiman added in the same tweet.

“The street was impressive. Tens of buildings, at least one 70-plus stories tall. All very modern, pastel-colored tile and glass,” Kaiman wrote minutes later.

The bureau chief said Kim did not make any public announcements, but that North Korea’s Premier Pak Pong-ju said, “to build this street is more powerful than 109 nuclear warheads.”

“When Kim left the stage and his limo drove away,” wrote Kaiman, “the applause stopped abruptly; the silence was unlike anything I’ve ever heard.”

Hours later, NHK reported that the “big and important event” was in fact a ceremony celebrating the completion of Ryomyong Street, one of Kim’s pet projects in the capital, home to skyscrapers and high-rise apartment buildings.

“Citizens cheered when Kim arrived at the ceremony,” said the Japanese broadcaster.

“He cut the ribbon after Premier Park Pong-ju gave a speech praising the top leader.”

The NHK added, “Other leaders of the Workers’ Party, including Kim’s younger sister, Kim Yo-jung, were also present.”

The completion of Ryomyong Street, which was planned to wrap up merely one year after Kim Jong-un handed down the order in time for Kim Il Sung’s birthday on Saturday, highlights the leader’s effort to instill a sense of patriotism among the North Korean public and show the rest of the world that the regime is unfazed by economic sanctions, said one South Korean government official.

Its very location has all the hints, the official added: the street sprawls from Pyongyang Sunan International Airport to the downtown area, making it impossible for foreigners to miss the glitz and glamor.