Trump attempts a deal with China on North Korea

Trump attempts a deal with China on North Korea 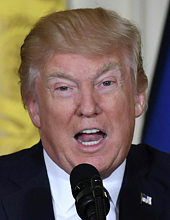 The framework of the Donald Trump administration’s approach to North Korea is taking shape, with Washington putting pressure on Beijing to get tough with Pyongyang and offering some payback on trade policy.

Despite ongoing concerns that Washington may ultimately resort to military action, U.S. President Trump, the self-styled deal-maker, let on he will use trade as a bargaining chip with China as an incentive to put pressure on North Korea.

In an interview with the Wall Street Journal Wednesday, Trump said he pointed out the United States’ tremendous trade deficit with China, worth hundreds of billions of dollars, which he said can be overlooked if Beijing solves the problem in North Korea.

“I said, you know, we’re not going to let that go ahead,” he said on the trade deficit. “But you want to make a great deal? Solve the problem in North Korea. That’s worth having deficits. And that’s worth having not as good a trade deal as I would normally be able to make.”

Washington “cannot allow” a country like North Korea to have nuclear weapons, he continued, warning of “mass destruction.” He said while North Korean leader Kim Jong-un doesn’t have the delivery systems yet, “you know he will.”

Trump also told the newspaper that he and Chinese President Xi Jinping “have a very open dialogue on North Korea,” admitting, “We like each other.”

He also said that the Chinese “are not currency manipulators,” walking away from a campaign promise to label Beijing as such early in his presidency.

The two leaders held their first summit on April 6 and 7 at Trump’s Mar-a-Lago resort, in which the two agreed to a 100-day plan for trade talks. They held a follow-up, hour-long phone conversation on Wednesday, in which Xi urged for the use of “peaceful means” to resolve the North Korea issue.

President Xi “wants to do the right thing,” Trump said in a joint press conference with NATO Secretary General Jens Stoltenberg Wednesday, saying they bonded well in their summit. “I think we had a very good chemistry together. I think he wants to help us with North Korea.”

He said he told Xi: “The way you’re going to make a good trade deal is to help us with North Korea. Otherwise, we’re just going to go it alone. That’d be all right, too. But going it alone means going it with lots of other nations.”

Trump went on to laud China for sending back ships carrying North Korean coal exports this week, saying, “That’s a big step, and they have many other steps that I know about.”

China banned all imports of coal from North Korea in mid-February after Pyongyang’s launch of an intermediate-range ballistic missile.

The president said, “I really think that China’s going to try very hard and has already started.” But he acknowledged that such steps “may not be effective.”

And in such a case, he said, “If it’s not effective, we will be effective, I can promise you that.”

The deployment of the U.S Navy’s Carl Vinson Carrier Strike Group to the Korean Peninsula is considered a show of force warning North Korea against further provocations.

While Trump has repeatedly said that all options are on the table, which could include military action, he has indicated he will for now let China try to restrain the North while leaving room open for Washington, if this strategy fails, to take military action or even conduct a pre-emptive attack on the North.

In additional to implementing stronger sanctions on Pyongyang in the case of further provocations such as a sixth nuclear test, the Trump administration may also implement secondary sanctions on Chinese entities involved in illegal dealings with North Korea.

China, North Korea’s traditional ally and largest trading partner, said it will also support strong sanctions and pressure on North Korea if it conducts additional provocations, a message conveyed by top nuclear envoy Wu Dawei during his visit to Seoul this week.

“China has never before shown such will to work toward resolving the North Korea issue because of pressure,” a government official in Seoul told the JoongAng Ilbo Thursday.

“Stating all options are on the table and claiming that Washington definitely will attack North Korea are completely different issues.”

Officials have indicated that Seoul and Washington have closely collaborated on the North Korea policy direction since the launch of the Trump administration.

In an attempt to assuage fears in Seoul that Washington may be considering a pre-emptive strike on Pyongyang, South Korean Minister of Foreign Affairs Yun Byung-se said that Washington will definitely consult with Seoul first before taking any important security measures related to Pyongyang.

“The United States has recently revealed to us its position that it will definitely consult and mediate with the South Korean government on important security policy involving North Korea,” Yun told the National Assembly’s Foreign Affairs and Unification Committee Thursday.

He said, “South Korea and the United States are cooperating closer than at any time in the past. There is no need to worry too much over ‘Korea passing,’” a slogan expressing the fear that Seoul may be left out crucial decisions.

Yun said that the South Korean government through official meetings and unofficial channels communicated its position during the Trump administration’s review of it North Korea policy - which he said was “considerably reflected” in the U.S.-China summit one week ago.

He added that Washington “has confirmed numerous times” with Seoul important decisions on Pyongyang and that when important actions are undertaken, the United States always first explains them before and after.

“In the case of an upsurge of military tension on the Korean Peninsula and if there is an accidental clash, this becomes a problem for all Korean people,” Democratic Party Rep. Park Byeong-seug, a fifth-term lawmaker, told the committee. “We need to hammer into the United States and China that no matter what happens, there cannot be any decision on the fate of the Korean Peninsula without the involvement of the Republic of Korea.”

On Xi and Trump’s phone conversation the previous day, Cho June-hyuck, spokesman for the South Korean Foreign Ministry, said in a briefing Thursday, “What was clearly revealed through such a phone call is that the United States and China at their highest level recognize the gravity and urgency of the North Korean nuclear problem, and confirmed domestically and internationally that the two countries leaders share the same understanding and volition to resolve this issue.”

Cho added, “In addition, our government sees that [Washington] has showed strong intention to lead China, and through close cooperation between South Korea and the United States, we plan to continue efforts to enable China to play an even more active and constructive role [on North Korea].”

U.S. Vice President Mike Pence is set to arrive on a three-day trip to Korea Sunday, kicking off his first visit to Asia since he took office, which the Ministry of Foreign Affairs said will be an opportunity to send a “clear message” about North Korea and the deployment of the U.S.-led Terminal High Altitude Area Defense missile shield, which has been opposed by Beijing.

“Vice President Pence’s visit comes at a very sensitive period, and also comes four years since [former] Vice President Joe Biden’s visit, so a clear message on cooperation on North Korea in terms of the South Korea-U.S. alliance is expected to be relayed,” Cho said.