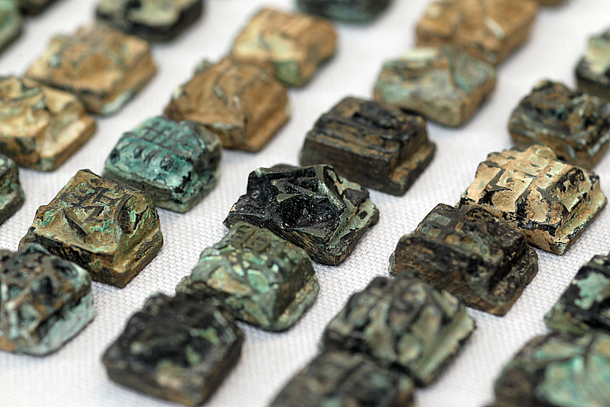 Debate continues over the claim that movable type used in Korea in the early 1200s has been found. [JOONGANG ILBO]

The state-run Cultural Heritage Administration has concluded that the movable metal type supposedly from the 13th century, known as Jeungdogaja, is not what it claims to be and therefore it won’t be designated a state treasure.

If the CHA recognized the type as a treasure, it would have made an official claim for recognition of the world’s oldest movable metal type.

“Based on our scientific investigations, which examined the typefaces and castings,” said Hwang Gwon-sun, the director of CHA’s tangible cultural heritage division, “it’s hard to say that the type is the one used to print the Jeungdoga,” which is the shortened version of the name of the book itself.

Jeungdogaja refers to movable metal type that was used to print a book of Buddhist sermons titled “Nammyeong Cheon Hwasangsong Jeungdoga (Song of Enlightenment with Commentaries by Buddhist Monk Nammyeong)” during the Goryeo Dynasty (918-1392).

A version of the book printed with woodblocks was made in 1239 and is National Treasure No. 1132. But according to historical records, the book was first printed using movable metal type. That book and the type, however, had never been found.

But in 2010, a Korean antique dealer claimed to have discovered type used in the printing.

Kim Jong-chun, chairman of the Korean Antiques Association and director of the Daboseong Ancient Art Museum, has claimed he owns 101 pieces of movable metal type from the early 1200s.

For years, historians have believed that the first known use of movable metal type was the “Jikji Simche Yojeol,” a book containing the essentials of Zen Buddhism printed in 1377 in Korea, long before the Gutenberg Bible was printed in 1455. In 2001, it was added to Unesco’s Memory of the World list.

But Jeungdogaja predates that book by about 130 years.

Kim applied for his pieces of metal type to be added to the list of state-designated treasures in 2011. Members of the Committee for Cultural Heritage have been deliberating on the issue since.

On behalf of the members, Gwon presented their investigation results. Among others, the correlation between the font on the type and the font in the actual Jeungdoga was low. The Jeungdoga used for the comparison was printed with woodblock, but experts expected a correlation nonetheless.

In terms of castings, Kim in his application said each type was cast in two parts and then the two were put together, which the members found to be untrue.

The members also said that although they reenacted various typesetting methods with the 101 letters Kim provided, they could not print the book as it is.

However, they kept the chance of Kim’s letters being from the Goryeo era open.

Experts also looked into a radiocarbon analysis of the ink on the type conducted by four different organizations, which concluded that the ink was very old. While they remain suspicious of the ink, they said they believe the organizations and the test themselves were credible.

According to historical records, Koreans first began printing books using movable metal type in the early 1200s. But currently no movable metal type from the Goryeo period are verified, although there are several from the Joseon Dynasty (1392-1910).