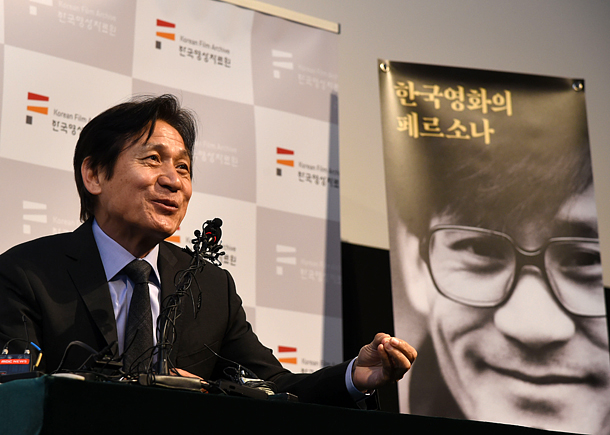 Veteran actor Ahn Sung-ki is a fundamental figure in the history of Korean movies. Throughout his career, the 65-year-old has experienced many ups and downs, with roles in nearly 130 films over six decades.

Recognized by the public as a well-mannered and warm-hearted man, the actor has played a wide variety of roles - from a husband who snuck into the United States and fraudulently marries an American citizen to obtain permanent resident status in “Deep Blue Night” (1985) to a third-rate comedian dreaming to become a director in “Gagman” (1988).

Scenes from some of his most famous movies. [KOREAN FILM ARCHIVE]

Even after all of his years in film, Ahn still has more to show, and still continues to work.

Debuting as a child actor in late director Kim Ki-young’s “The Twilight Train” (1957), 2017 is a special year for Ahn, as it marks the 60th anniversary of his career.

To celebrate the anniversary, the Korean Film Archive has opened a special event at Cinemateque KOFA in Mapo District, western Seoul, where 27 of the actor’s films will be screened until April 28.

“Honestly, I didn’t want to celebrate the anniversary because I didn’t want to mark a new point in my life,” said the actor during a joint interview with the press on the opening day of the event. “But I’m grateful for the celebration and a lot of attention.”

Being such a prolific actor, it is not easy for Ahn to pick few most memorable movies. But when asked, Ahn managed to select eight.

“’Good Wind Day’ is a very meaningful movie. When the film was released in 1980, Korea was undergoing a social change, and the film well reflects that era. ‘Mandara,’ which was my first work with director Im Kwon-taek, is also the movie I like very much. It is meaningful because its artistic value was recognized internationally. My first movie to be recognized by many people was ‘Whale Hunting,’ which also was my first work with filmmaker Bae Chang-ho.”

In contrast to the myriad movies that fill up his filmography and to many people’s surprise, he has appeared in a drama only once.

When asked about the reason he focuses on movies, Ahn explained, “After [working on] ‘Good Wind Day,’ I was offered to play a role in a one-shot investigation drama, where I played a criminal. It only took two days to shoot 50 minute-length scenes, which is a lot faster than shooting movies… When shooting films, the lights, angles and character’s state of mind are all taken into account, but that wasn’t the case for drama. Since then, I thought drama fundamentally does not match [my style of working].”

Ahn further added why he loves films so much.

“[To watch a movie at a theater], people first need to make a reservation, visit the theater and sit down in the dark space expecting to be moved. I find [the effort people put in] very endearing. That’s why I love films.”

When asked about his plans and dreams for forthcoming days, he said, “My dream is to work for a long time, although I’m not sure whether that is something I have control over.”

Ahn continued, “One thing that I’m sad about is that older cineastes leave the film industry quite early. Though I want them to stay a little longer and continue working on films, many of them have left, and I feel quite lonely.”

There are two reasons he should stay in film longer, according to Ahn.

“I want to extend the retirement age for actors to make them believe that they can work for a long time if they try hard. I believe extending retirement age is something that I should do for junior actors and for myself.”