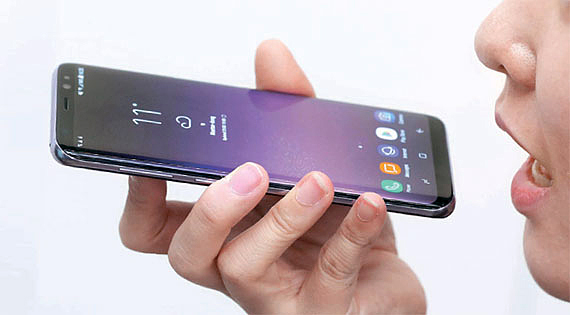 Mobile bank apps are supposed to make transactions easier, but in security-conscious Korea, even sending money via smartphone requires a cumbersome multistep process that involves numerous passwords and methods of identity verification.

Soon, that may be no more, as banks are introducing voice recognition features that promise to take less time to complete transactions.

Woori Bank is taking the lead with SORi, a voice-activated feature it launched last month. SORi is available on the iPhone 5 and above as well as Samsung’s Galaxy S7 and S8. Tap the SORi button on Woori’s bank app, and it starts to speak. “I am SORi, your financial assistant powered by artificial intelligence. What can I help you with?” A user can then give it directions like “Pay mom 20,000 won,” about $18.

The system then asks for confirmation of the receiver’s name and amount of money. After that, a request for fingerprint identification pops up, and with one final touch, SORi will send the money.

Shinhan Bank and KEB Hana Bank are also preparing similar features that can run on Bixby.

Experts say the appeal of voice recognition lies in its simplicity. Most Korean bank apps currently require multiple verification steps that can bog down users if they forget their password or security cards containing number strings that banks issue to customers for added protection. Voice recognition has the potential to supersede these processes.

“With the tapping and clicking of buttons, one has to go through several pages to eventually get to the service they want,” Gu Myung-wan, a computer science professor at Sogang University said, describing the current way of navigating mobile bank apps. “But a voice recognition system can shorten multiple steps. We can say the adoption of interactive voice function will mean a simpler user interface.”

A simpler method, though, can pose more security risks, which is why Woori says it added fingerprint verification to its voice recognition feature.

Although SORi’s interface promises to be more intuitive, the initial registration process is complex and multi-layered. Users have to verify ownership of their smartphone using an authentication code sent via text. The app will then ask users to register their fingerprint and punch in number strings from their bank-issued security card.

“The mechanism of the voice recognition service is that initial registration will be complicated, but once a user registers for the service, everyday use is easy and simple,” said Lee Kyung-chan, a manager at Woori’s smart finance division who participated in the development of SORi.

Lee recommended users save payees’ names and bank account numbers on the bank app to make transfers even easier.

The feature’s success will depend on how well it understands verbal commands. Woori says errors have been few so far, but it does take two to three seconds for SORi to process voice commands because it is based on weak artificial intelligence that understands spoken words only after converting them to text.

A more advanced form of technology might be understanding context and predicting functions that users might want based on their conversations with the machine. “Microsoft and Apple are leading research in this area,” Professor Gu said.

The next step for banks might be “speaker recognition” that can differentiate between different human voices. Technology this sophisticated may negate the need for biometric identification like fingerprints.

Industry observers say banks might finally opt for completely replacing human tellers with machines that can handle not only everyday tasks but also financial advising.

“If machine learning is fully incorporated into asset management, it could deliver complex information on financial products right away,” said Kim Woo-jin, a researcher at the Korea Institute of Finance, a local think tank.