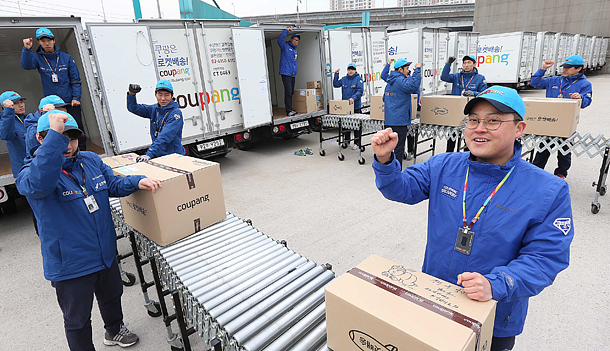 Coupang, the industry leader by market share, posted 1.9 trillion won ($1.7 billion) revenue, 73 percent more than the previous year, in an earnings report released Friday. Its operating loss, on the other hand, deepened slightly, to 560 billion won from 547 billion won.

Since last year, Coupang has been moving away from the business model it started with in 2010, a Groupon-like platform that offered daily discounts and deals, to focus on its open market platform that connects consumers directly with small retailers. It terminated the daily deals service in February, acknowledging its low profitability, and shored up investment in delivery services for its social commerce platform.

The company built two logistics centers in Incheon and Gyeonggi last year and expanded its free Rocket delivery service that sends select items to customers within 24 hours. It now operates all across the country, with 85 percent of packages delivered by staff the company itself hires and maintains.

“Coupang moves with a big picture and long-term focus,” a company spokesperson said. “Instead of easily predictable small attempts, we are making big challenges to offer something that customers have never experienced before. For that, we invest boldly.”

The company has pursued a strategy of offering the lowest prices on certain daily necessities like powered milk and baby diapers to compete against other e-commerce sites.

“WeMakePrice is going to further enhance the company’s profitability by concentrating on a few select strategies,” CEO Park Eun-sang said. “We will continue to boost sales and try to give back the profit generated from pursuing a ‘cheapest rate’ strategy to consumers.”

WeMakePrice added that its monthly transaction volume surpassed 300 billion won in March for the first time since the company was founded in 2010.

The daily deals service operator chalked up the loss to investment in a new business segment. Last year, TMON expanded its Super Mart service, which used to handle only daily necessities, to frozen food and fresh groceries.

“TMON invested 60 billion won to businesses that will drive the company in the long run and differentiate TMON from others,” the company said in a statement.