Sales of travel products take off for May break

Sales of travel products take off for May break 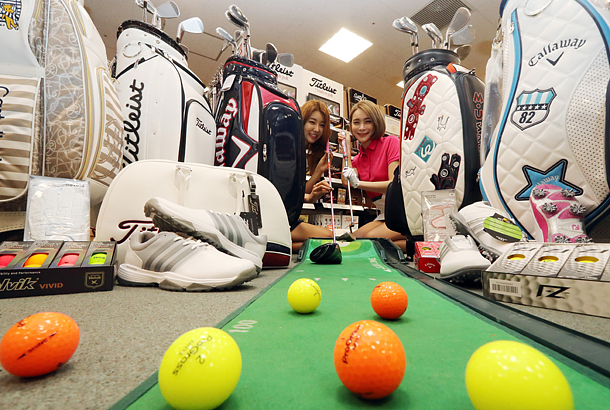 Models present various golf equipment at E-Mart’s Seongsu branch in eastern Seoul on Friday. The retail chain is offering discounts of up to 30 percent on golf equipment through May 1, ahead of a nine-day national holiday. [YONHAP]

Retailers and travel-related industries are seeing a rise in demand particularly early this year, thanks to the unusual nine-day holiday in the first week of May.

April is usually a sluggish month for retailers, as consumers spend less between March, when spring school semesters start, and May, which has many holidays.

This year, April is different because consumers are preparing for nine days off in early May, with two national holidays, a weekend and the presidential election all between May 1 and 9.

Korean Air said that airline reservations between April 28 and May 7 rose about 18 percent compared to the previous year, except flights to China.

Industries relevant to travel such as duty-free stores and hotels are also arranging sales and marketing events.

Between Friday and June 1, Lotte Duty Free will give prepaid cards up to 320,000 won ($28.04) to consumers who spend more than $300. There will also be a raffle for 10 shoppers to travel to Australia between June 8 and 14. Shoppers spending more than $1 at Lotte by April 21 can participate.

Local hotels have deals, too, for those who opt for staycations. E-Land Group’s Kensington Hotel in Yeouido will offer a room upgrade for five visitors who reserve the “Enjoy Your Meal” package, comprised of a one-night stay in a standard or deluxe room and two tickets for the breakfast buffet. Ibis Ambassador Hotel in Gangnam has a package that includes a room for one night, breakfast for two and two tickets for the Art Toy Culture with Style exhibition at COEX.