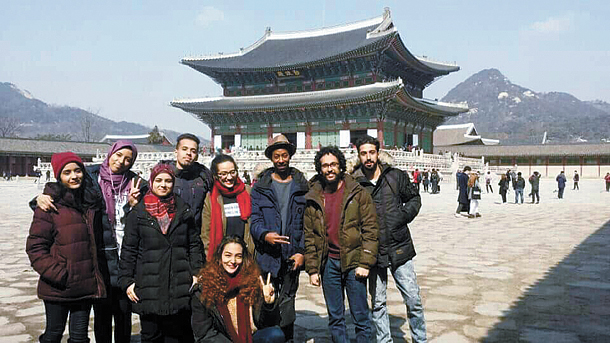 Nine Moroccan students being sponsored to study for a second year in Korea take a celebratory photo in front of Gyeongbokgung Palace. [CHONBUK NATIONAL UNIVERSITY]

Thanks to an anonymous donation from a businessman, nine international students who couldn’t afford their tuition and were about to be forced to return home to Morocco will be able to complete their master’s program.

After a tough competition, nine students were selected to come to Korea last September as exchange students. They entered master’s programs at Chungbuk National University in various subjects including engineering, business and English literature.

According to the university, Morocco looks to Korea as a model economically, in health care and in education. But not many Moroccan students study here, because they can’t afford the tuition.

Most of the Moroccan exchange students are from modest families.

Their scholarships were only for one year and the Moroccan students wanted to complete their two-year programs. They went to their mentor Cho Hwa-rim, the university’s French African studies director, to ask for help. Chonbuk National University couldn’t extend the scholarships without being unfair to other exchange students.

Cho got in touch with Chafik Rachadi, Ambassador of Morocco, and they started a joint search for sponsors.

“Africa, rich in natural and human resources, is a blue ocean area for Korea,” the businessman said, using the jargon for a place of great business potential. “I expect Moroccan students to grow and become mediators between Korea and Morocco.”