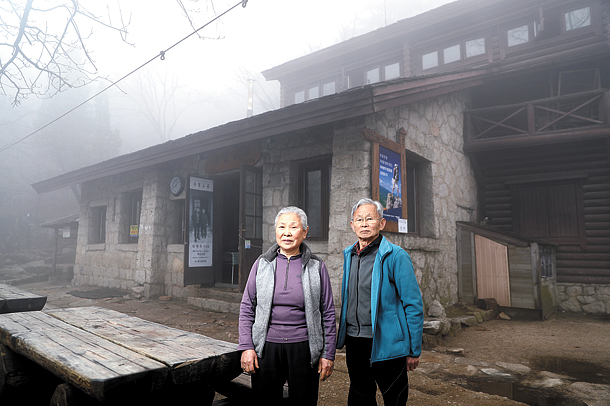 At the foot of the peaks of Insu and Baekundae mountains, there is a place considered to be an oasis by the keen hikers and mountaineers who often visit Mount Bukhan.

Treasured since 1993, Baekun Cabin was Korea’s first privately-owned shelter. Looking inside, there are tables and chairs scattered about with two older proprietors purveying cup ramen and sundry snacks.

“My life’s last remaining wish is to live at Baekun Cabin greeting passersby,” says Lee Yeong-gu, 86, the owner of the cabin.

After a fire consumed Baekun Cabin in June 1992, it was rebuilt and, Lee says, 25 years after construction, “the facility will pass to public ownership, taking effect in May.”

Twenty-five years ago, Lee drew up an arrangement with the Korea National Park Service (KNPS). Lee’s grandfather built the first cabin during the Japanese occupation of Korea (1910-1945) in 1924. It was rebuilt again by Lee’s father in 1933.

Six years after dropping out of elementary school, Lee climbed up to the cabin the year following Korean liberation in 1946 and has lived there for the last 61 years. Kim Geum-ja, 77, his wife, married Lee in 1964, and they have five children together.

Lee Geon, their eldest, 52, has been trekking to the cabin from Seongnam, Gyeonggi, three or four times a week since his was 30, working on the cabin with his parents.

“If the [cabin] goes to the government, the memories of Baekun Cabin as a mountaineer’s oasis will disappear,” says Lee. “The contract for land donation drawn up with the KNPS 25 years ago is very regretful. Because the cabin was built using mountaineers’ donations, it is in a sense their home.”

Both Lee and his wife cherish the memories they have of helping 100 or so people take shelter from storms, recover from accidents or simply rest for a night or two in the quiet space between the two peaks. They say they first took up that responsibility in the early 1980s, before the launch of mountain rescue teams.

“Saving those people, using the house’s bedding and blankets for emergency relief, feeding them with porridge and rice, will remain a precious memory,” Kim says.

“Baekun Cabin is now being used by mountaineers marooned by storms or blizzards as a shelter,” Lee says.

The couple asked only that the Baekun Cabin placard, written by Sohn Kee-chung, who won gold at the 1936 Summer Olympics in Berlin, not be taken down next month.

“In the event that one does not accede to the land transfer,” the KNPS said, “the policy is to evict him or her.” It did say, however, that “when the land transfer is concluded, and there are no issues after a safety inspection. It will continue as a shelter, and if Lee wishes, we are reviewing the plan of having him hired as a caretaker.”

Lee and Kim worry that if they are forced to leave they will have nowhere to go.