North Korea parades what appears to be new ICBM

North Korea parades what appears to be new ICBM 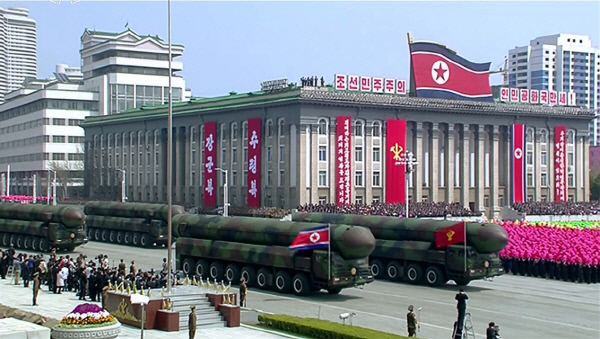 North Korea shows off what appears to be launch tubes for a new intercontinental ballistic missile (ICBM) during a military parade Saturday in the capital of Pyongyang to celebrate the 105th birthday of the country’s founder Kim Il Sung. [YONHAP]

North Korea unveiled what appears to be launch tubes for a new intercontinental ballistic missile (ICBM) during a military parade in the capital of Pyongyang to celebrate the 105th birthday of the country’s late founder Kim Il Sung, South Korea’s military said Saturday.

Local authorities said further analysis would be required to determine conclusively whether the missile in the tubes was an ICBM. If so, it would be the first time North Korea has publicly displayed the new weapon.

In a New Year’s speech on Jan. 1, North Korean leader Kim Jong-un said the country was in its “final stage” of test-firing an ICBM that could reach the U.S. mainland. Pyongyang has recently been ratcheting up its threats to strike the United States with a missile, blaming President Donald Trump’s bellicose rhetoric against the regime.

Officials in South Korea’s Joint Chiefs of Staff said the launch tubes displayed during the parade were longer than the North’s intermediate-range ballistic missiles, leading them to believe it might have intercontinental strike capability.

North Korea’s state-run Korean Central News Agency (KCNA) has yet to mention anything about an ICBM at the parade. Kim did not deliver a message at Kim Il Sung Square, where the event was held, but Choe Ryong-hae, vice chairman of the ruling Workers’ Party of Korea, said in defiant speech that the North was “prepared to respond to an all-out war” and use its nuclear weapons.

The reappearance of Kim Won-hong, the state security minister whom South Korean officials believed was purged earlier this year, also caught the attention of local authorities. The South Korean government believed Kim Won-hong had been sent to a “political re-education” prison camp for sending false reports to Kim Jong-un.

On Saturday, the spy chief was seen standing just a few steps away from Kim Jong-un on video released by the KCNA. South Korea’s Ministry of Unification, which handles inter-Korea relations, said Kim Won-hong might have completed his term at the prison camp and been reinstated, though he was absent during a parliamentary meeting in Pyongyang on Tuesday.

There were no signs North Korea conducted a nuclear experiment on Saturday amid concerns that the sixth of its kind could be held in time with Kim Il Sung’s birthday celebration. There was also no ballistic missile test.

The parade was aired live on KCNA’s YouTube channel.

U.S. Vice President Mike Pence will arrive in Seoul on Sunday for his first trip in office to the Asia-Pacific region and stay until Tuesday.