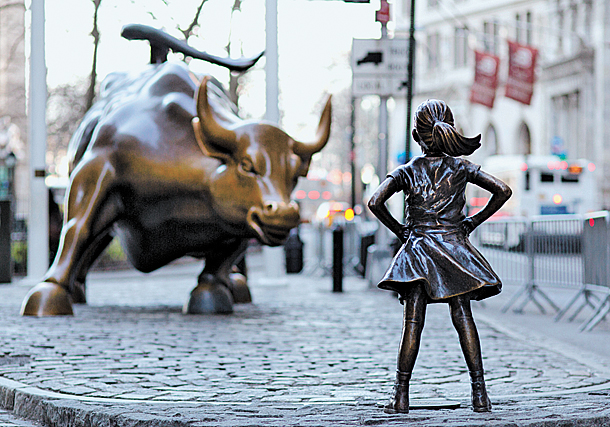 NEW YORK - The sculptor of Wall Street’s “Charging Bull” statue on Wednesday demanded the removal of the “Fearless Girl” statue that’s faced off against the bull since last month.

Arturo Di Modica said his 11-foot-tall bull is supposed to represent “freedom in the world, peace, strength, power and love” but “Fearless Girl” has turned his work’s message into something negative.

“The girl is right in front doing this, ‘Now I’m here, what are you going to do?”’ Di Modica complained.

An attorney for Di Modica, Norman Siegel, said the 4-foot-tall bronze girl was created as part of an advertising campaign for Boston-based investment firm State Street Global Advisors and its placement opposite the bull exploits the earlier sculpture for commercial gain and negates its positive message.

“The placement of the statue of the young girl in opposition to ‘Charging Bull’ has undermined the integrity and modified the ‘Charging Bull”’ Siegel said. “The ‘Charging Bull’ no longer carries a positive, optimistic message. Rather it has been transformed into a negative force and a threat.”

Di Modica’s bull has become a familiar icon since he gave it to the city in 1989.

Artist Kristen Visbal’s statue of a girl with her hands on her hips was placed on a traffic island facing the bull on March 7.

The work was embraced by tourists and others as a symbol of female empowerment, though some critics questioned the motives of State Street, which said the statue was intended “to celebrate the power of women in leadership and to urge greater gender diversity on corporate boards.”

“Fearless Girl” was supposed to be a temporary installation celebrating International Women’s Day, but given its popularity city officials said it could stay through February 2018.

Siegel, who joined Di Modica and other lawyers at a news conference, said the attorneys sent letters requesting the girl’s removal to Democratic Mayor Bill de Blasio and the CEOs of State Street and its advertising firm, McCann Worldgroup.

De Blasio responded on Twitter that men who don’t like women taking up space “are exactly why we need ‘Fearless Girl.”’