In Seoul, being your own boss isn’t easy

In Seoul, being your own boss isn’t easy 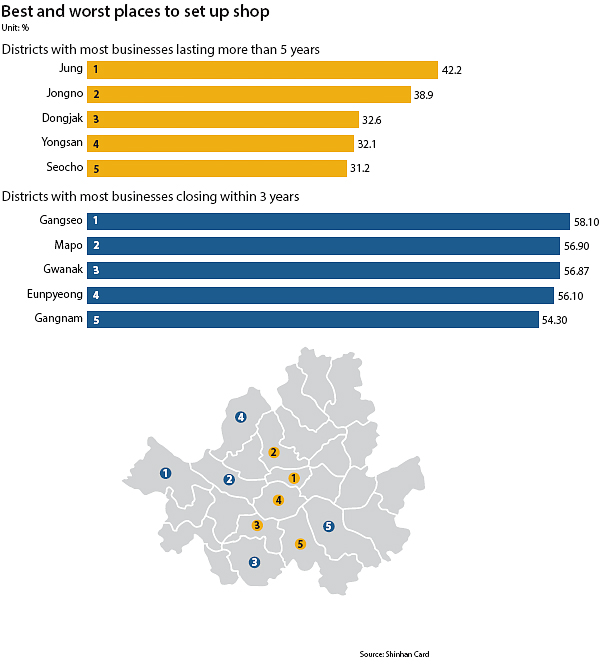 Kim Sang-moon worked as an import car salesman for nine years before he left to open a gym in Jongno District, central Seoul, in February. He invested 280 million won ($246,000) from the money he saved working at the dealership.

“I wanted to try doing what I really wanted to do with my life before I turn 40,” said Kim, 37. He had been working out at a health club for more than 10 years and became increasingly interested in fitness, leading him to start his own gym.

Kim focused on attracting office workers from the area but has only managed to attract 100 members. He’s competing with four existing fitness clubs within 1 kilometer (0.6 miles) of the gym.

“I didn’t know it would be this hard to operate my own business,” Kim said. “I have already spent about 300 million won, but I don’t see a future anymore, and I am having a hard time with rental fees and attracting more members.”

There are more than 70,000 people like Kim who start a business in Seoul every year. Many of them are recent graduates struggling to find a job and mid-career professionals who want to be self-employed.

As opening up one’s own business becomes more popular in Korea, there are also more people closing up shop because of high rent and labor costs. Shinhan Card’s data showed there were more businesses shuttered in Seoul last year, 74,080 to be precise, than new ones that opened. 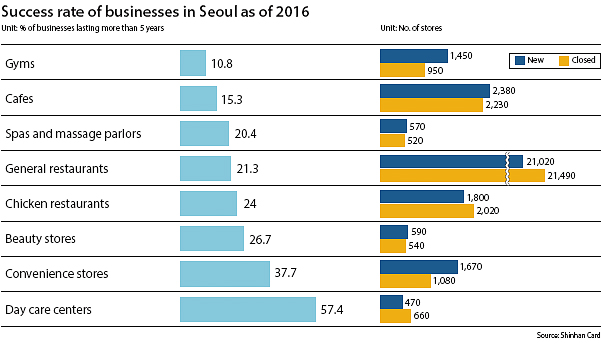 Shinhan Card analyzed which sectors, regions and demographic groups were more likely to close their businesses, and found gyms and massage parlors had the highest rate of failure. Although gyms are experiencing significant growth, 69.3 percent of them close within three years. The failure rate is similar for massage parlors: 65.6 percent of them are shuttered within three years. This was followed by cafes with 63.1 percent, restaurants with 62.4 percent and beauty-related stores with 61.7 percent.

On the other hand, 57.4 percent of day care centers lasted longer than five years, and 49.9 percent of interior design stores remained in operation for a similar amount of time.

The least competitive area might be Jung District in central Seoul, where 42.7 percent of businesses close within three years, much lower than the 52.9 percent average in the whole capital. Jung District was also the region where many businesses survived more than five years. That rate was 42.2 percent, a lot higher than average of 29.8 percent in Seoul.

“Consumer demand in Jung District is high because there are many offices in the district, and the area is quickly developing from an old area to new area,” Shinhan Card said in its report.

In nearby Jongno District, the rate of businesses lasting for more than five years was second highest, at 38.9 percent, followed by Dongjak District in southern Seoul at 32.6 percent and Yongsan District in central Seoul at 32.1 percent.

By age group, most people starting their own businesses were in their 40s, at 30.4 percent. In the past, many new business owners were retirees over the age of 60, but last year, there were only 5,940 retirees who opened up shop.

Business owners in their 20s had the highest rate of failure, with 76.4 percent lasting less than three years, perhaps owing to their lack of experience and preparedness. The number of shuttered businesses by people in their 20s was 4,290.

“People planning to open new businesses need to research thoroughly about the market environment in regions where they want to do business for at least more than six months,” said Kwak Jong-bin, a director at the Seoul Metropolitan Government.