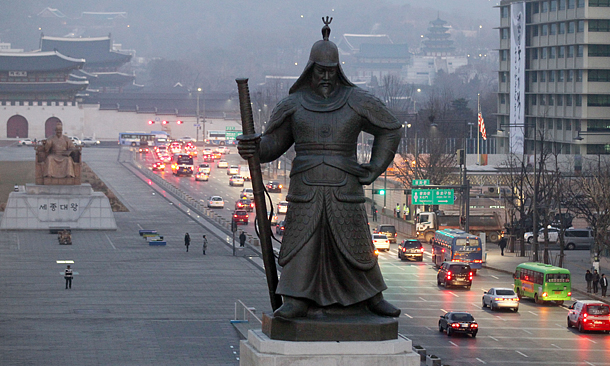 The two state treasures that best underscore the historic achievement of admiral Yi Sun-sin (1545-98) and King Sejong the Great (1397-1450) are at the center of bizarre scandals. Yi and King Sejong are arguably the most respected historical figures in Korea. [JOONGANG ILBO]

In Gwanghwamun Square, a major landmark of Seoul, stand two historical figures in Korea that are arguably the most respected.

Yi, with his valor and strategic mind, won many battles against the Japanese during the 16th-century Japanese invasion known as the Imjin War (1592-98).

Sejong, meanwhile, created hangul, the Korean alphabet, in the hopes that reading and writing will no longer be only for the privileged class.

However, the two artifacts that best honor their achievements are at the center of bizarre scandals - both of which are seeing no breakthrough for years. 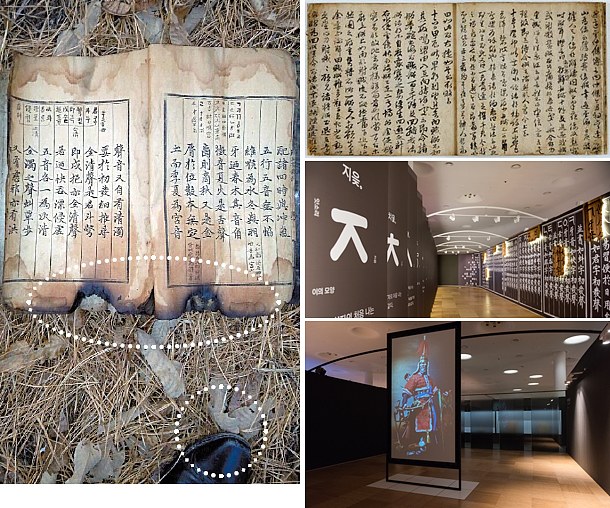 Clockwise from above: “Hunminjeongeum” in Sangju, North Gyeongsang, seen with seared corners. Bae Ik-gi, whose foot shows in the photo, is holding the book hostage; “Nanjung Ilgi” cannot be taken out of a shrine in Asan, South Chungcheong due to a legal battle among descendents of Yi Sun-sin; “Way of Hunminjeongeum” is one of the contemporary art installations at an exhibition that sought to display the two treasures together; A projection of a Yi Sun-sin figure by Kim Se-rang, also at the show. [YONHAP, KANSONG ART AND CULTURE FOUNDATION]

A man who alleges he owns the precious text regarding Korean writing revealed a photo of the artifact last week, once again triggering controversy over the text’s authenticity and the legality of his ownership.

Bae Ik-gi, 54, who resides in Sangju, North Gyeongsang, shared the photo with Korean media as he was running for parliamentary and local by-elections on April 12. Bae, who ran as an independent, failed to win.

Bae pledged that if he was elected, he would have the “Hunminjeongeum” added to the list of Korea’s National Treasure list.

This comes two years after a fire broke out in his house, fueling fears that what could be the beloved Korean treasure may have been damaged.

Back then, Bae said “the world will never see the book.”

The photo Bae recently shared showed the book seared in its bottom. The letters, however, were readable. Bae said one page was lost in the 2015 fire and some other pages have seared bottom as shown in the photo but the text is readable.

“I will reveal it completely when I get elected,” he said, insinuating that until then the book, which could be as much as 1 trillion won ($875 billion), would be kept to himself.

Asked why he shared the photo, Bae said he “ran in the parliamentary election so that ‘Hunminjeongeum’ could see light, but still there are many people who doubt that I own the book.”

In fact, when he was registering as a candidate for the parliamentary election, he reported that his assets amount to 1.48 trillion won including the “Hunminjeongeum,” supposedly worth 1 trillion won. However, the election committee in Sangju concluded since he would not show the artifact, the 1 trillion won asset could not be recognized.

No one had seen the so-called Sangju Hunminjeongeum since 2008.

One of a kind

The book, written by Joseon Dynasty court scholars in 1446, is a guide to hangul, the Korean alphabet system that was created by King Sejong. The name of the book translates into “The Proper Sounds for the Instruction of the People.”

It has two parts: the Yeui section, which explains why hangul was created, and the Haerye section, which details the principles, usage and gives examples of the writing system.

While the Yeui section is replicated in several other ancient documents, the Haerye part is extremely rare and, as a result, is valuable, providing important clues to studying the Korean writing system.

The Kansong Art Museum in Seoul has “Hunminjeongeum” featuring both the Yeui and Haerye segments. It is designated National Treasure No. 70.

It is also registered on Unesco’s Memory of the World list. Respected art collector Jeon Hyeong-pil (1906-62), who founded the Kansong Art Museum, bought it in 1940.

Bae’s copy is known to be made from the same woodblock that printed Kansong’s copy.

In 2008, Bae informed the state-run Cultural Heritage Administration (CHA) that he also had a copy of “Hunminjeongeum” with the Haerye section, claiming that he came across it when he was sifting through his collection of ancient documents.

Researchers from the CHA visited Bae’s home and concluded that the book was indeed authentic.

There has been controversy over whether or not Bae is the rightful owner of the artifact since he revealed that it was in his possession in 2008.

A month after the CHA concluded that the book was real, an antique dealer named Jo Yong-hun claimed that Bae had actually stolen the book from him.

Jo won the civil suit in 2012 and announced in May that year that he would donate the book to the state. The CHA even held a donation ceremony with Jo - ironically without the presence of the artifact, as only Bae knew where it was.

Jo passed away later that year.

But the Supreme Court cleared Bae of the charges in 2014 in a criminal suit, saying that while Jo is the rightful owner, it’s hard to say Bae stole it from Jo. In the process, however, Bae was detained for more than a year.

Technically, the CHA is the legal owner of the book. Regardless, Bae has refused to give the book to the state and has kept its location a secret ever since.

Bae in fact feels victimized for being imprisoned for no good reason, and he also thinks that the CHA and Jo conspired against him. Therefore he feels the state should not only pay for the book if it wants it, but the state should also compensate for the losses he suffered.

“People should not think that an individual should just donate his or her asset to the state,” he said, “when they wouldn’t concede even 10 won from their pocket.”

He also said he wants an investigation into how the CHA and Jo conspired to steal his book.

The CHA in the meantime said last week after Bae revealed the photo that it will negotiate with Bae regarding getting back the book after the parliamentary elections were completed.

“If he doesn’t return the book, we will have to resort to legal means, lawsuits and forceful execution [of laws] next month.”

Meanwhile, the Kansong Art and Culture Foundation, related to the Kansong Art Museum, has recently kicked off an exhibition at the DDP themed around courage and wisdom, two values needed in difficult times like today.

The idea was to have both the “Hunminjeongeum” and the “Nanjung Ilgi,” the 16th-century journal that Yi kept, displayed, along with contemporary art pieces inspired by the two men and their achievement.

However, that historic meeting didn’t happen.

The organizers had to settle for a copy of “Nanjung Ilgi,” because on Tuesday, the day of press event for the exhibition, a court rejected a complaint filed by Choi Sun-seon - a daughter-in-law in Admiral Yi’s clan and the owner of the diaries - to overturn the court ruling last month that accepted an injunction filed by the clan to ban the artifact from being moved outside the shrine for Admiral Yi, Hyeonchungsa, in Asan, South Chungcheong.

“It was Choi that approached us first,” Kim Ju-hee, the director of Kansong Art and Culture Foundation told Korea JoongAng Daily.

“She heard that we were preparing an exhibition to display ‘Hunminjeongeum.’ She said there are few people nowadays visiting Hyeonchungsa and hoped more people would appreciate ‘Nanjung Ilgi.’”

Officials said that they cannot say for certain that the original copy of “Nanjung Ilgi” will not be displayed at the exhibition, as it appears Choi will again file a complaint.

So why does the clan not want the artifact to be shown to the public in the exhibition, while Choi does?

The rift between the descendants of Admiral Yi Sun-sin and Choi - who married late Lee Jae-guk, a descendant of the war hero - goes way back to the early 2000s, which was when Lee passed away, and all historic articles and sites related to Admiral Yi Sun-sin became Choi’s.

People have said that while the legendary war hero might have fought off foreign enemies and brought peace to the country, his descendants obviously could not settle the enemies within themselves and solve internal strife.

In 2009, Koreans were shocked to read headlines that the house where Admiral Yi Sun-sin grew up as a young boy practicing martial arts dreaming of becoming the country’s soldier was put up for auction.

Along with the house, the site where Yi practiced archery was also put up for auction. Rumors circulated that even the “Nanjung Ilgi,” Yi’s swords and other artifacts related to Yi were up for sale on the black market.

Choi - who had businesses related to weddings, fashion and cosmetics - invested in real estate development projects which put her in enormous debt and eventually she committed fraud, according to the prosecution’s investigation.

This is how the house and the site were put up for auction.

The clan bought the house and the site, so the conflict saw an end. But as the recent scuffle over the exhibition of “Nanjung Ilgi” shows, the clan’s mistrust of Choi still remains deep.

The tragedy goes back to 2002, when Lee, who long suffered from mental illness, died, without having any children. The clan suggested that Choi adopt the son of Lee’s second cousin. Choi initially said yes, but changed her mind after learning that the clan wanted all assets of the clan - that used to be Lee’s - to go to the son, not her. They took the matters to the court and the court ruled in favor of Choi, giving her all of the assets.

But contrary to views that Choi might have contacted Kansong and wanted the diaries shown for money, officials of Kansong said they had not paid Choi any money and made sure she understood that they could not afford to pay for the rental of the artifact.

Pundits say it’s a pity how the government failed to make artifacts related to Yi state property when they had a chance. In 1960s a state project was underway to make Hyeonchungsa a sacred place, which was one of the opportunities that the government missed.

During the Japanese invasion of 1592-98, Admiral Yi Sun-sin kept a series of journals documenting the war.

Nanjung Ilgi, National Treasure No. 76, is a rare record of the battle written by the commander himself, and provides invaluable information on the defense system in those days, such as then-confidential military strategies.

For this reason, in 2013 the journals have been added to Unesco’s Memory of the World Register. Nanjung literally means “during the war” and ilgi translates as diaries.

“This war diary has been widely used in modern Western countries as well as in Korea to study the sea battles during the seven-year war,” Unesco explains about the relic on its Web site.