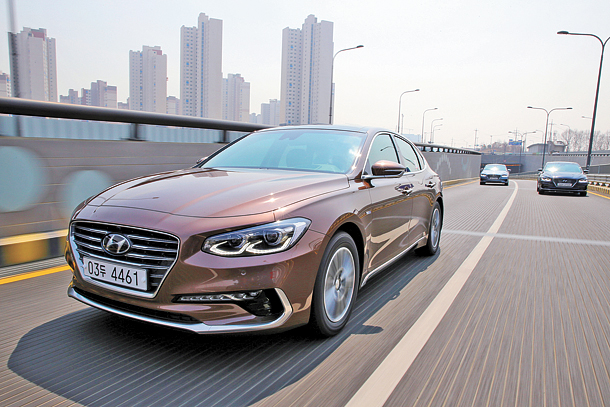 The new Grandeur IG Hybrid on a test drive on April 5 in Seoul. Hyundai hopes the new hybrid will build on the hype of its cousin the Grandeur, which was released in November. [HYUNDAI MOTOR]

At this year’s Seoul Motor Show, eco-friendliness was one of the buzzwords the participating auto companies shared.

While fully electronic cars such as Tesla and the Chevrolet Bolt have yet to find a solid footing in Korea as the next big thing in automobiles due to the lack of necessary infrastructure, hybrid cars are in the limelight as the most pragmatic options for local drivers to go green while enjoying a good ride. 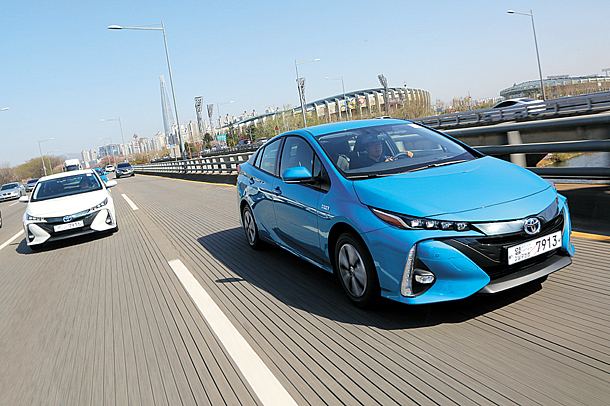 Toyota Prius Prime plug-in hybrid on the road from Jamsil to Goyang, Gyeonggi, on April 13. The vehicle can travel as far as 40 kilometers without using an ounce of gas on the electric mode. [TOYOTA]

This reporter took both models for a spin and while the two autos clearly differ in class and size, each offered a unique, yet quiet and powerful ride, a testament to how far the companies have come in eco-friendly technology.

Grandeur, which has a new facelift, was the top seller for four months after its launch in November. It received high praise from local consumers for its exterior design. Its hybrid version adopted the exact same exterior, with the only difference being the 17-inch aerodynamic alloy wheels for hybrid vehicles.

The new hybrid also runs on a lithium polymer battery with a 1.76kWh capacity, increased from previous 1.43 kWh without a change in weight. Its electric motor has enough power to accelerate to 120 kilometers (75 miles) per hour in electric vehicle mode without using the gas engine.

The first thing that caught this reporter’s attention was how quiet the 2.4 Hybrid Exclusive Special model was during testing. The start button was pressed twice just to make sure that the car was on. Although it was raining heavily, droplets on the windshield were the only clues to the weather outside, as the rain was barely audible inside. 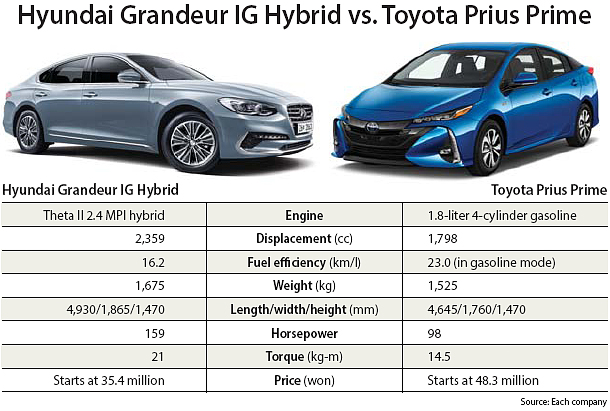 Even on a slippery road, it was easy to steer. In fact, whenever the car veered from the center of the lane on an 80-kilometer course from Mayfield Hotel in Gangseo District, western Seoul, to Heyri Art Village in Paju, Gyeonggi, the “Hyundai Smart Sense” driving assistance system suspended the steering wheel to help the driver back into the lane.

Once on the highway, it took some time for the driver to notice that the car had shifted out of electric vehicle mode to engine mode. Hyundai Motor explained that a technology offsets the engine noise with reserve torque of the electric motor. Still, the power generated by a 2.4-liter Theta 2 MPI hybrid engine and its electric motor, which together produce 159 horsepower and 21 kilogram-force meters of torque, was enough to accelerate the car without hindrance.

If silent driving was the slogan of the day for Hyundai’s Grandeur hybrid, for Toyota’s Prius Prime, it was fuel efficiency coupled with a powerful yet comfortable drive.

“It’s more expensive than the regular Prius,” said Yohichi Sugiura, chief engineer for Prius Prime. “It has a bigger battery than Prius, which is why Prime is heavier.”

The engineer from Japan explained that enlarging the battery lengthened the driving distance in electric vehicle mode. The company said the vehicle can travel up to 40 kilometers on battery alone.

This was precisely the case when the Prius Prime was driven on a 70-kilometer course from Jamsil, southeastern Seoul, to a coffee shop near Haengjusanseong Fortress in Goyang, Gyeonggi.

Starting out on a congested Jamsil intersection on electric vehicle mode, there was no engine noise but just the sound of the electric motor. Initially, there was no chance to accelerate in heavy traffic, but the full strength of the Prius Prime eventually was evident.

The spokesperson explained, “Unlike regular hybrid vehicles, we have adopted a dual motor system for Prius Prime, the first among Toyota cars.” The dual motor system allows MG1 and MG2, both electric motors, to be used to accelerate the car in the Prius Prime, while in other hybrids, the first motor would be used to push the car forward while the other motor is used to charge electricity. This was made possible by the electricity storage in the rear.

The engine was barely needed on the course. Granted, the heavy congestion on the majority of the 70 kilometers kept the car under 50-kilomters per hour. However, even when the accelerator was pressed to hit 110 kilometers per hour, the engine wasn’t necessary in electric vehicle mode and only slightly in the hybrid mode. Although the maximum distance left on electric mode declined from 40 kilometers to 3 kilometers, the charging of the electricity was clearly noticeable under cautious driving.

“Prius Prime allows driver to accelerate as fast as 130 kilometers per hour without running the engine,” said a Toyota technician.

While driven in electric mode, even the air-conditioning helped with fuel efficiency. Each car seat is equipped with sensor and the AC turned only on seats that were occupied.

The only downside of driving the Prius Prime, however, was the noise at high speed, which was much more conspicuous than in the Grandeur Hybrid driven a week earlier.