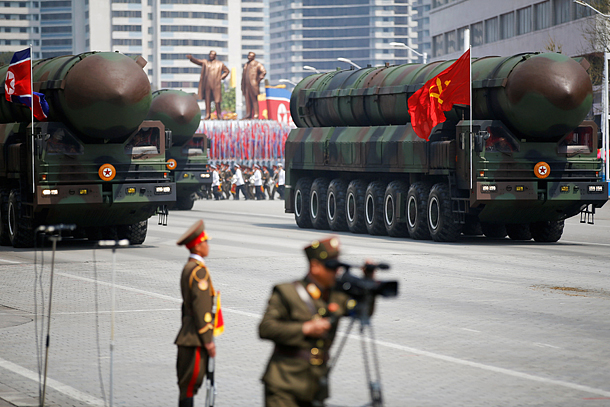 North Korea fired a ballistic missile off its east coast Sunday morning hours before U.S. Vice President Mike Pence arrived in Seoul for his first trip in office to the Asia-Pacific region, sending another message that the Kim Jong-un leadership will not back down in the face of Washington’s hardline policy against its nuclear and missile development program.

But the test, North Korea’s fifth this year, ended in complete failure, as the missile blew up almost immediately after take-off, said South Korean and U.S. military officials.

South Korea’s Joint Chiefs of Staff said the missile was fired from the eastern port city of Sinpo in Hamgyong Province at around 6:20 a.m., where the North previously tested submarine-launched ballistic missiles. The type of projectile and the reason for its failure is not yet known.

The most recent ballistic missile test was 12 days ago on April 5, hours before Chinese President Xi Jinping and his wife arrived at the Mar-a-Lago estate in West Palm Beach, Florida, for two days of bilateral talks with U.S. President Donald Trump. It also ended in failure.

Among the five missile tests the North conducted this year, three were considered failures by local and American authorities.

In an unusually terse statement, the U.S. Department of Defense said Sunday, “The president and his military team are aware of North Korea’s most recent unsuccessful missile launch. The president has no further comment.”

Vice President Pence was briefed on the missile launch, as well, White House aides reportedly told journalists traveling with him, although he did not make a public statement on the matter upon his arrival in Seoul.

The launch of another missile was alarming on its own, as it came a single day after North Korea rolled out what appeared to be three types of intercontinental ballistic missiles (ICBMs) in its capital, Pyongyang, during an annual parade celebrating the birth of the country’s founder, Kim Il Sung, grandfather of the current leader, Kim Jong-un.

Considered North Korea’s most important holiday of the year, the Day of the Sun provides a propaganda platform for the communist regime, during which it celebrates with an extravagant military parade comprising throngs of goose-stepping soldiers as well as tanks, missiles, and occasionally, new weapons.

Local military officials said the North appeared to have revealed launch tubes for two new types of ICBMs, but that further analysis would be required to determine conclusively whether the missiles in the tubes had actual intercontinental capabilities.

The launch tubes were longer than the North’s intermediate-range ballistic missiles, said local officials, leading them to believe it might be an ICBM.

Among the two new ICBMs, one was rolled out on a 16-wheel transporter erector launcher with a presumed length of 20 to 22 meters (66 to 72 feet) and a diameter of 1.9 to 2 meters. A South Korean military official who requested anonymity said the projectile “looked similar” to Russia’s RS-24 Yars, an ICBM that has the capacity to fly 11,000 kilometers (6,835 miles), far enough to reach the U.S. capital of Washington.

The other new ICBM was thought to be about 18 meters long and have the capacity to fly 7,000 kilometers, which puts Hawaii within range.

Both appeared to use solid-fuel engines, said multiple military sources who spoke with the JoongAng Ilbo, which enables the North to launch on very short notice.

The third ICBM rolled out over the weekend was a KN-08, initially shown to the world during a previous military parade in 2012. But officials said the one shown on Saturday was a “highly more enhanced version” than the one in 2012, adding the three-stage missile seemed to have been simplified to two stages, which requires more sophisticated technology.

Kim Jong-un did not deliver a message Saturday at Kim Il Sung Square, where the parade was held, but Choe Ryong-hae, vice chairman of the ruling Workers’ Party of Korea, said during a 20-minute speech that the North was prepared to respond to an all-out war and use its nuclear weapons.

In a New Year’s speech on Jan. 1, Kim said his country was in its “final stage” of test-firing an ICBM long enough to hit the U.S. mainland.

While Pyongyang has often boasted of its capacity to strike the United States with an ICBM, it has never flight-tested one across the Pacific. Local and U.S. authorities stated the North has yet to reach that level, though both sides admit that significant progress is being made to reach that goal.

The reappearance of Kim Won-hong, the state security minister whom South Korean officials believed was purged earlier this year, also caught the attention of local authorities. The South Korean government believed Kim Won-hong had been sent to a political re-education prison camp for sending false reports to Kim Jong-un.

On Saturday, the spy chief was seen standing just a few steps from Kim Jong-un on video released by the state-run Korean Central News Agency. South Korea’s Ministry of Unification, which handles inter-Korean relations, said Kim Won-hong might have completed his term at the prison camp and been reinstated, though he was absent during a parliamentary meeting in Pyongyang last Tuesday.

The ministry said further analysis was needed to tell whether he is now back in his old post as the minister of state security. Four stars were placed on his uniform Saturday. Local analysts claim he appears to have lost weight.