Pence arrives in Seoul amid rising tensions with Pyongyang

Pence arrives in Seoul amid rising tensions with Pyongyang 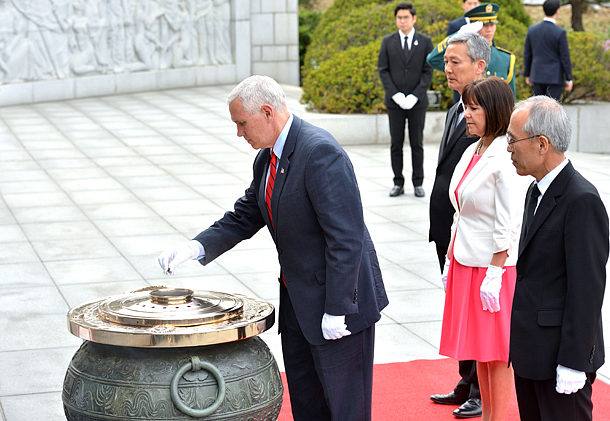 U.S. Vice President Mike Pence burns incense at the Seoul National Cemetery in Dongjak District, southern Seoul, Sunday, on his first of a three-day schedule in South Korea. His father, Edward Pence, was a U.S. Army veteran in the 1950-53 Korean War who earned the Bronze Star. [YONHAP]

U.S. Vice President Mike Pence touched down in South Korea Sunday for his first of a five-leg trip to the Asia-Pacific region, being the highest-level official from the Donald Trump administration yet to arrive here amid escalating tensions with the North.

The arrival marked Pence’s first-ever visit to the South, and was nine hours after North Korea conducted its fifth ballistic missile test this year earlier in the morning, though it ended in failure.

Pence arrived at the Osan Air Base in Pyeongtaek, Gyeonggi, at 3:30 p.m. but has yet to make any public remarks. A joint statement between him and Prime Minister Hwang Kyo-ahn, who concurrently serves as acting president, is expected to come this afternoon after the two leaders discuss North Korean issues at Hwang’s office in central Seoul.

Reuters cited a U.S. foreign policy adviser traveling with Pence on Air Force Two as saying that the test was believed to be a medium-range missile and had come as no surprise.

“It’s a failed test,” the official said under the condition of anonymity. “It follows another failed test. So really, no need to reinforce their failure. We don’t need to expend any resources against that.”

According to the adviser, the missile’s flight lasted four or five seconds. Pence, joined by his wife Karen and two daughters, began his three-day schedule Sunday with a visit to the Seoul National Cemetery in Dongjak District, southern Seoul.

An official at South Korea’s Ministry of Foreign Affairs said the visit, which wasn’t mentioned in his initial schedule announced by the White House earlier this month, highlighted Washington’s commitment to the South Korea-U.S. alliance, a “bond that was made during the Korean War when the South fought alongside the U.S.”

Pence’s father, Edward Pence, was a U.S. Army veteran in the 1950-53 Korean War who later earned the Bronze Star. After his visit to the cemetery, the vice president was planned to spend Easter Sunday with U.S. and South Korean troops and their families in the evening.

This morning, Pence will visit the demilitarized zone separating the two Koreas and drop by Camp Bonifas to meet with U.S. Army soldiers. Later, he will meet Prime Minister Hwang and Foreign Affairs Minister Yun Byung-se at the Seoul Central Government Complex.

Tomorrow, Pence will meet business leaders at the American Chamber of Commerce and then leave for Japan. The White House said in a statement last Friday that Second Lady Karen Pence will “observe an art therapy program and participate in a roundtable discussion with art therapists.”

Pence is the third senior government official from the Trump administration to visit South Korea, a month after Secretary of State Rex Tillerson came on March 17 and two months after Secretary of Defense James Mattis came on Feb. 2.