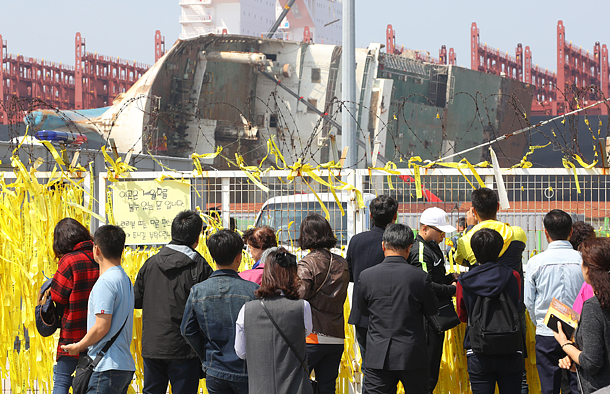 Visitors to Mokpo New Port, South Jeolla, where the salvaged Sewol ferry lies, commemorate the third anniversary of the ferry’s sinking on Sunday, paying tribute at memorials and tying yellow ribbons, a symbol of support for the victims, at the fence installed around the ferry at the port as it awaits investigation and a search for the remains of the nine unrecovered passengers and articles of all the dead. [YONHAP]

Commemoration events to remember the 304 who died as a result of the Sewol ferry disaster took place throughout the country on Sunday, with thousands gathering to remember those who sank with the ferry on this very date three years ago.

Some 1,000 gathered at Paengmok Harbor in Jindo, an island in South Jeolla, the closest point on land to where the ferry capsized in the water southwest of Jindo.

The ferry, carrying 476 passengers, sank on a trip from Incheon to Jeju Island on April 16, 2014. The vessel was lifted on March 25 and arrived at Mokpo New Port in the southwestern port of Mokpo on March 31.

The commemoration at the harbor began on Sunday morning with speeches dedicated to victims, and ended with the release of 304 yellow balloons into the sky.

The balloons were yellow because yellow ribbons have come to be a symbol of the Sewol victims and their relatives, after thousands upon thousands of yellow ribbons were hung at mourning sites throughout the country following the ferry’s sinking.

“I ask for your support for the investigation process, so that the nine unrecovered victims can come back home to their families,” said Huh Heung-hwan, 53-year-old father to Huh Da-yoon, one of the 250 Danwon High School students who died in the ferry. Her remains have not been recovered.

Some events were held nonetheless, including an on-site painting performance using the names of the nine unrecovered victims. People hung yellow ribbons on the fence set up around the ferry, which is now lying on its port side.

A civic group organizing a commemoration event at the port criticized the ministry’s announcement as an attempt to use the relatives to interfere with events. The ministry had announced earlier that there will be no memorial center at the port, because “the area should be kept foremost as an area for investigation into the ferry for the remains of those missing.”

“Every citizen,” said Lee Min-ho, a 31-year-old visiting the port to commemorate the third anniversary of the disaster, “must show their support for the relatives of the victims who have to bear the pain of loss for the rest of their lives.”