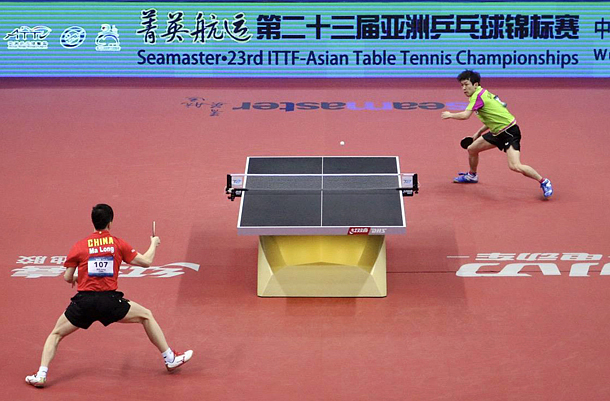 Jeong Sang-eun plays the round of 32 match against Ma Long of China at the 23rd International Table Tennis Federation Asian Table Tennis Championships in Wuxi, China on Friday. [SCREEN CAPTURE OF ITTF]

Jeong Sang-eun created the biggest sensation throughout the Seamaster 2017 International Table Tennis Federation (ITTF)-Asian Championships, defeating Ma Long, the No.1 ranked table tennis player in the world, in the round of 32 and winning a silver medal.

“Ma Long’s loss is the biggest news in the tournament,” said the ITTF.

When Jeong faced the world’s top player on Friday in Wuxi, China, he kept his focus and successfully made drive attacks throughout the game to win 3-1.

Ma, a gold medalist at the 2016 Rio Olympics, has not dropped from his top ranking since March 2015. This was Ma’s first loss to a non-Chinese table tennis player in five years, since the 2012 London Olympics when he lost 4-2 to Niwa Koki of Japan. 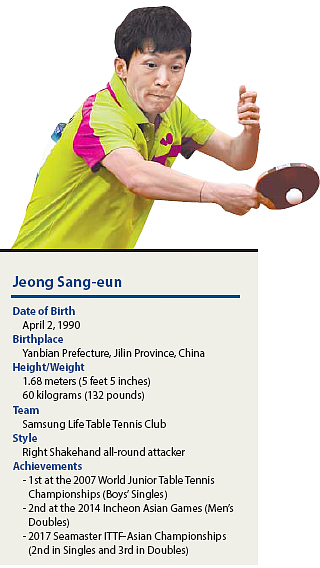 “I made a lot of mistakes,” Ma said after his loss to Jeong. “Jeong prepared well for the match.”

After defeating the toughest player in the field, Jeong won the remainder of the matches to advance to the final round. Prior to the semi-final match, Jeong won against Xu Xin, the third-highest ranked player in the world, and had a comeback victory against Niwa in the semifinal round.

Jeong lost the first two sets but came back strong to win the third and fourth set, forcing the match into a fifth set. Jeong was losing 10-6 in the last set, but stayed focused throughout the match to win five consecutive points and advance to the finals.

Although he lost his final match to Fan Zhendong, the second-highest ranked player in the world, on Sunday, his drive attacks made the opponent nervous throughout the match. Jeong’s silver medal was Korea’s first silver in 17 years, since Kim Taek-soo, a former table tennis player and the Korean national team coach, won a silver in 2000.

“I have regrets on my performance in the final round,” Jeong said after the match, “but through this tournament, I gained confidence.”

Jeong, from the Yanbian Korean Autonomous Prefecture in China, started playing table tennis at age 6 with his father. He showed great talent in the sport, finishing in the top regional tournaments in China. But after earning his Korean citizenship in 2005, Jeong quit table tennis for a year.

Shortly after, in March 2006, while attending Dong Incheon High School, Jeong took up the racket once more, and by December 2007, he was on the national team. For the first time in Korean table tennis history, he won the World Junior Table Tennis Championships boys’ singles.

Despite his outstanding junior career, Jeong struggled in his senior career, frequently being on the second division national team. He did help Korea win a silver medal at the 2014 Incheon Asian Games in men’s doubles, but Jeong never got to compete at the Olympics, falling behind players like Jung Young-sik and Lee Sang-su.

“Since the Incheon Asian Games, Jeong injured his shoulder and from this, he had a hard time mentally,” said Lee Chul-seung, coach of Samsung Life Table Tennis Club.

During this time, Jeong considered retiring. But the qualifying tournament for the national team in February 2016 was another turning point for him. He started the event hoping to finish within the top 14 to be named in the second division team, but surprisingly, he ended up finishing fourth and earned his spot on the national team.

“After he made it to the national team, he worked very hard to improve his drive skills,” Lee said. “And Jeong, who is quiet most of the time, asked me to let him compete at the international events. I felt his strong determination to get back to the top.”

With his accomplishment at the Asian Championships, Jeong now looks forward to competing at the 2018 Jakarta Asian Games and the 2020 Tokyo Olympics.

“I am confident that I will be able to play another great match against Chinese players,” Jeong said.