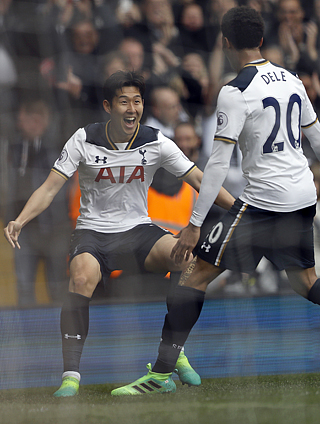 Son Heung-min of Tottenham Hotspur celebrates after scoring a goal during the English Premier League football match against Bournemouth at White Hart Lane stadium in London on Saturday. [AP/YONHAP]

Son Heung-min of Tottenham Hotspur is having his best season on the English Premier League (EPL), scoring a goal against Bournemouth at White Hart Lane on Saturday to tie the highest-scoring Korean in European leagues in a single season with Cha Bum-keun. Cha, a vice president of the local organizing committee for the 2017 FIFA U-20 World Cup, holds the season record for Korean players in Europe with 19 goals scored in the 1985-86 season while playing for Bayer Leverkusen.

While Spurs was leading 1-0, Son scored another goal in the 19th minute with his right foot, assisted by Harry Kane. Spurs won the match 4-0 again, after winning 4-0 against Watford in its previous match. This marks Son’s 19th goal of the season, with 12 goals in the EPL and six goals in FA Cups and one goal in UEFA Champions league.

Including Son’s eight goals in 2015-16, his first season with Tottenham Hotspur, Son has recorded 27 goals in the EPL. Son’s record of 27 goals also ties him with Park Ji-sung’s record for the most number of goals scored by a Korean football player in the EPL. Park, who played for Manchester United and Queens Park Rangers of the EPL from 2005 to 2013, scored 27 goals throughout his career.

“It’s great to win,” Son said during his postgame interview quoted on Tottenham Hotspur website. “We’re really happy to win 4-0 again but we just have to keep it going.”

For further accomplishment, Son has now set his eyes on winning the EPL, where the team is currently second behind Chelsea. Although Spurs are still in second in the EPL standing, they are only four points away from Chelsea and improved their season record to 21 wins eight ties and three losses at 71 points. Not only that, Spurs have won seven consecutive matches, setting a new club record with the most number of consecutive wins in the Premier League.

In the EPL, Son is still tied for 12th with 12 goals in the EPL’s top scorer ranking, only one behind the 10th ranked scorer. With his performance throughout the game, Son was rated 8.6 out of 10 by the whoscored.com, a football statistics website.

Spurs will next play in the English FA Cup match against Chelsea at Wembley Stadium on Saturday.