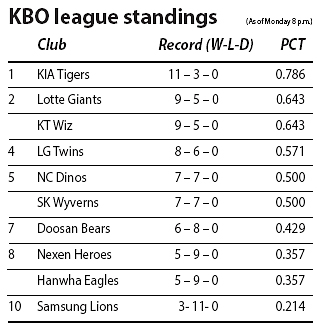 
Over the weekend, the Kia Tigers won all three games against the Nexen Heroes to take the sole lead in the Korea Baseball Organization (KBO). The Tigers have won five consecutive games to become the first team in the 2017 KBO season to earn 10 wins.

While the Tigers were losing to the Heroes 5-4 in seventh inning on Sunday, An Chi-hong had a two-run hit to take the lead from the Heroes and win. With a win, the Tigers have now improved their record to 11 wins and three losses. In previous records, 12 teams out of 31 teams that have achieved the first ten wins have continued its lead in the KBO and won the regular season.

In Daejeon, the SK Wyverns won against the Hanwha Eagles 10-1 to continue its five games winning streak. The win also allowed Park Jong-hoon, the submarine pitcher for the Wyverns who pitched five scoreless innings, to become a winning pitcher for the first time this season after losing two.

On the other side, the Samsung Lions are still struggling to get themselves out of the bottom of the standing, losing 11 games so far this season. 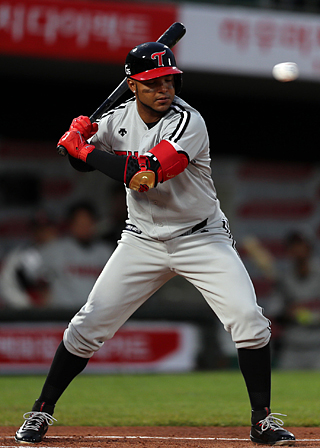 
Luis Jiminez, fourth hitter for the LG Twins, has played a significant role in winning against the KT Wiz 12-5 at Jamsil Baseball Stadium on Sunday.

Six RBIs was Jiminez’s best record in a game since his KBO debut in 2015. Although Cha Woo-chan, starting pitcher of the game, allowed nine hits, including a home run over the course of five innings, Jiminez’s outstanding performance allowed Cha to be the winning pitcher.

Prior to the game, Jiminez had been off to a poor start with a 0.182 batting average due to a right finger injury from the exhibition games in March. Despite the poor performance of the team’s fourth batter, the Twins got off to a good start, winning six consecutive games, but after, they were in a five-game losing streak. In the Twins’ game against the NC Dinos on Thursday, Yang Sang-moon, manager of the Twins, excluded him from the batting line-up.

But within a day, Yang put Jiminez back in the line-up and he responded well to the manager’s expectations. With that, Jiminez is now ranked fourth in the KBO home run ranking with four and is first in the RBI with 17.