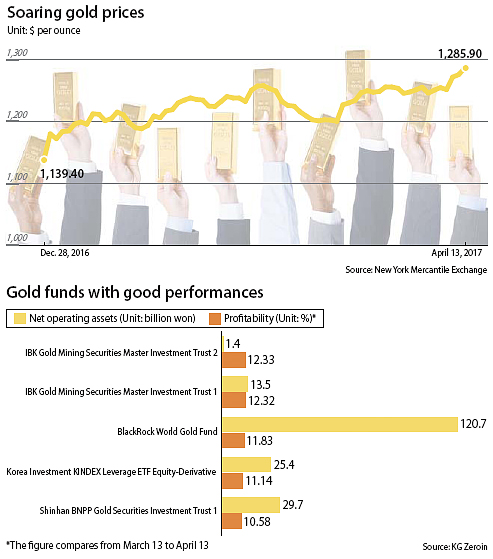 Prices of gold tend to rise when there are various risks since it is considered one of the key safe havens for assets. As gold prices have been climbing at a faster rate recently, the profitability of the country’s gold funds is soaring as well.

The prices of gold rose significantly this year. According to the New York Mercantile Exchange, the price of gold was $1,285.90 per ounce, as of Thursday. This was the highest since Nov. 4 when it reached $1,303.30 per ounce. Data showed that the prices jumped 12.8 percent just this year.

The United States fired missiles at a Syrian air base and bombs against ISIS in Afghanistan recently. These moves have weakened investor sentiment in the global market. At the same time, the tension between Korea and neighboring countries is rising due to the North Korea’s nuclear missile issue.

“It appears that many investors are going for safe haven assets such as gold as the geopolitical risks are growing from Syria and North Korea,” said Lee Sang-won, a researcher at Hanwha Investment & Securities. “The upcoming election in France only raised concerns as well.”

In France, Marine Le Pen, far rightest, Francois Fillon, center right, and Jean-Luc Melenchon, far leftist, are competing against each other in the presidential campaign.

Many experts believe that the prices of gold will continue to rise in the near future as global uncertainties remain. In fact, many investors have been buying chunks of gold recently.

The invested amount in ETF’s SPDR Gold Trust reached 842.41 tons on Tuesday and rose six tons when compared to the previous week. Korea Gold Exchange said there were about 400 gold mini bars that weigh 10 grams to 100 grams sold daily just this month, which is a lot more than the 100 mini bars sold a day in the past on average.

“There will be lots of investors who will be looking for safe haven assets due to the various uncertainties in the second quarter of this year,” said Hwang Byung-jin, a researcher at NH Investment & Securities. “This might be an opportunity for investors to buy gold related products as there will be a low chance of another interest rate hike made in the United States in the second quarter.”

The interest rate hike in the United States tends to lead to the value of the U.S dollar rising, which eventually lowers the price of gold.

“The U.S. economy, which has been playing a major role in bringing up the global economy, might be weakened a little bit,” said Kim Doo-eon, a researcher at Hana Financial Investment. “This will reduce the expectation on further inflation.”