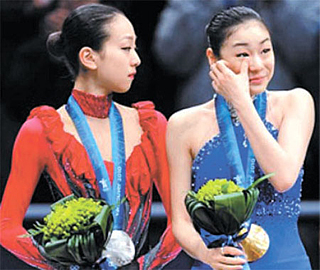 The Battle of the Brians was the men’s single competition between Canadian Brian Orser and American Brian Boitano. Orser later became the coach of the figure skating queen, Kim Yuna. Boitano won the gold medal by one-tenth of a mark and Orser won the silver.

The Battle of the Carmens was the competition between East German Katarina Witt and American Debi Thomas. In the women’s single competition, both athletes chose to skate to the music of Bizet’s Carmen. Witt won gold and Thomas won bronze. Both battles are long remembered in the history of figure skating.

There are also other famous rivalries in figure skating, although they have not won special names. One is the competition between Tonya Harding and Nancy Kerrigan and the other is between Kim Yuna and Mao Asada. Their stories are so famous that figure skating fans probably all know them.

About one month before the Winter Olympics in Lillehammer, Norway, Kerrigan was attacked on Jan. 6, 1994. The attack took place during the U.S. Championships to select the national athletes to compete in the Olympics Games. Kerrigan could not skate after, and Harding won the ticket.

In fact, Harding was not guaranteed to be selected to compete in the Olympics because of an injury in the previous season, but Kerrigan’s missing place was an opportunity for her. Soon, three attackers were arrested and one of them, it turned out, was Harding’s bodyguard. The Olympics took place during the investigation and Kerrigan managed to recover from her injury to win silver. Harding was ranked eighth and admitted to the crime after the competition. Her career ended.

Kim retired after the Sochi 2014 Winter Olympics and Asada retired last week. In the press conference on April 12, Asada was asked who Kim was to her. “Kim Yuna and I motivated each other,” Asada said during her press conference. “We helped each other develop as skaters.”

Kim used to give similar answers when she was asked about Asada. Their thoughts appeared to be genuine.

They first met in the 2004 Junior Grand Prix Final and competed against each other and advanced together for 10 years until Kim retired. During that time, many figure skating stars such as American Kimmie Meissner, Italian Carolina Kostner, Japanese Miki Ando and Canadian Joannie Rochette existed. But the world remembers the decade as the rivalry between Kim and Asada.

The candidate registration for the May 9 presidential election ended on Sunday. A fierce competition will take place in the coming weeks. During the first debate last week, some candidates inspired others, while others used the swords of words against others. During the coming weeks, the battles will grow fiercer and the fights will become more frequent. Voters want to see a great competition, like the one between Kim and Asada, not the one between Kerrigan and Harding.

*The author is a deputy sports editor of the JoongAng Ilbo.