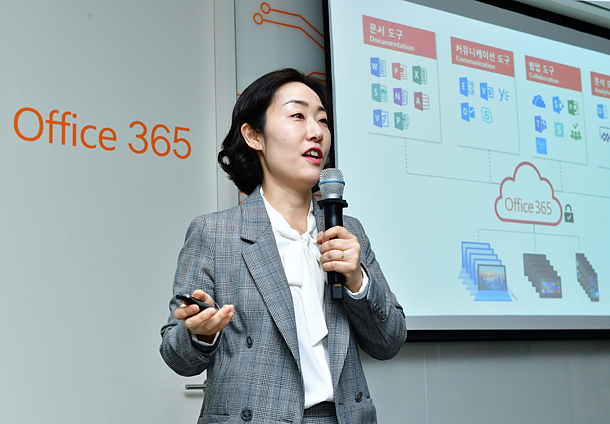 Microsoft is offering in-country data residency for its cloud-based office software to attract Korean corporate customers who are skeptical of cloud-based software for security reasons.

The option allows companies to keep their data secure in the country to address domestic legal and regulatory needs regarding data security. The American tech giant said Monday that Korea is the sixth country outside of the United States to be guaranteed in-country data residency. Such service is possible with two data centers that the company established in Seoul and Busan in February.

“Korean companies have been relatively slow compared to the U.S. and Europe in implementing on-demand software based on cloud systems, or software as a service, mostly due to security risks,” said Yoo Hyun-kyong, director of Microsoft Korea’s Office software business. “However, the number of corporate customers has recently been increasing with special acceleration from this year.”

Data stored in two Korean centers cannot be copied or transferred overseas under any circumstances, according to Microsoft. Before establishing data centers at home, Korean corporate customers had to store data mostly in a Singapore-based server.

Until now, in-country data residency was only offered in Australia, Canada, India, Japan, the United Kingdom and the United States. The launch of data centers in Korea came as “Microsoft sees great potential in Korea’s cloud market among other countries in Southeast Asia,” Yoo said.

On Monday, Microsoft also introduced a team collaboration app called Microsoft Teams and artificial intelligence-based tools on its Excel and PowerPoint programs. Forecast on Excel will help users project future information like stock prices, and PowerPoint Designer will aid users in designing presentations by suggesting templates based on the visual content.