Christie’s to auction 53 Korean works in New York : Sale comes amid drop in demand for such art, compared to Chinese

Christie’s to auction 53 Korean works in New York : Sale comes amid drop in demand for such art, compared to Chinese 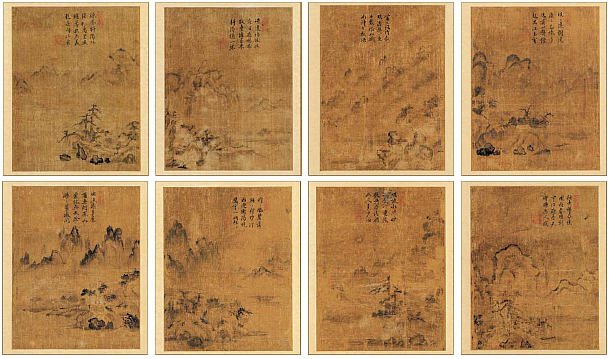 A 16th-century album of “Eight Views of the Xiao and Xiang” (Sosangpalgyeongdo) is one of 53 Korean works of art that will be put up for sale at Christie’s in New York next week. [CHRISTIE’S]

A total of 53 Korean works of art will be put up for sale at Christie’s in New York next week.

One of them is the 16th-century album of “Eight Views of the Xiao and Xiang” (Sosangpalgyeongdo).

The painter of “Eight Views of the Xiao and Xiang” is unknown, but the poems written on the pieces are by Gu Han (1524-88), who was married to Princess Sukjeong (1525-64), which we know because his name is stamped at the end of the poems.

Christie’s described the overall mood of the painting as “evocative and sentimental,” adding that the “pictorial elements are uncomplicated, and negative space is more emphasized,” and “literati taste prevails in the paintings.” 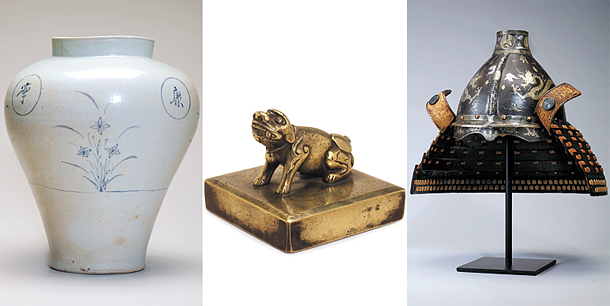 From left: An 18th century blue-and-white porcelain jar; a 19th century bronze haetae-shaped seal; a gold and silver inlaid iron helmet from between the 17th and 18th centuries. [CHRISTIE’S]

Another included artifact related to a Korean princess is a bronze seal in the shape of a haetae, or mythical lion, from the 19th century that belonged to Princess Sukseon (1793?1836), a daughter of King Jeongjo (1752-1800).

Also, a blue-and-white porcelain jar with autumn grasses on it from the first half of the 18th century is up for auction for an estimated price of between $700,000 and $800,000.

There is also a gold-and-silver-inlaid iron helmet from between the 17th and 18th centuries.

Among other patterns, the helmet features four-clawed dragons, clouds, the sun and Sanskrit characters in gold and silver.

Christie’s Korea said through a press release that the helmet “resembles a Joseon king’s helmet in the collection of the Victoria and Albert Museum, London.”

The auction house added that there are earlier Chinese helmets of the 15th and 16th centuries that resemble the artifact.

The auction takes place on April 25 at Rockefeller Plaza in New York.

The last time there were so many Korean ancient works of art featured at Christie’s New York auction was three years ago at the “Robert Moore Collection of Korean Art.”

The auction comes as many are concerned that interest in Korean antiques from global auction houses has declined, whereas interest in Chinese ancient works is soaring. In 2014, Christie’s announced that for Korean antiques, it will focus on online and individual bids.

Insiders in the Korean art world say Korean antiques were highly popular about 20 years ago. For instance, the most expensive Korean antique sold at an overseas auction was a 17th century white porcelain piece with a dragon on it that sold for $8.41 million at Christie’s in 1996. But about 10 years later, in 2006, a similar porcelain piece sold for about one fourth that price.